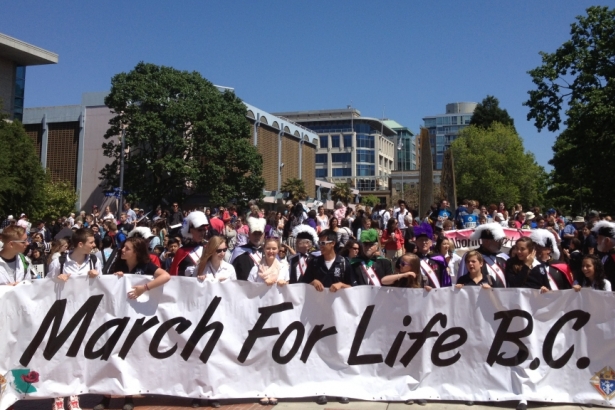 White is the spokesperson for Abbotsford Right to Life. I first met him in October of last year at the National Pro-life Conference in Scarborough, Ontario, and he once introduced me to an unsuspecting older pro-life gentleman as a “spy for the enemy.” Basically, we're on pretty friendly terms.

And so, Thursday was a day of firsts for me: my first pro-life coach bus ride, my first Catholic Mass, my first thousands-of-pro-lifers-strong rally at the Provincial Legislature in Victoria, BC.

A CALL TO END “FEMALE GENDERCIDE”

Close on the heels of MP Mark Warawa's decision to abandon his motion condemning gender-selective abortion in Canada, and utilizing momentum from the 2012 documentary “It's a Girl: The Three Deadliest Words in the World”, the theme of this year's national and provincial Marches for Life was “female gendercide.”

Jared White told me that the fate of Warawa's Motion 408 was “very disappointing” – but that he expected Warawa to stand up in Parliament in Ottawa while the National March was taking place, and “catch the speaker's eye.”

Sure enough, Warawa addressed his fellow MPs later that day, saying, “Mr. Speaker, the statement ‘it’s a girl’ shouldn’t be a death sentence” – and not much else. As the National Post noted, Warawa spoke about the issue of “gendercide” so euphemistically he managed to wholly avoid the word “abortion.”

BC March for Life spokesperson Anastasia Pearse asserted that Warawa's motion was a success, in that it “succeeded in raising awareness and educating people.” Pearse, dressed in a long pink skirt and black-and-pink “Defend Girls” t-shirt, referred to March for Life attendees as people “who believe in the value of human life from conception through to natural death.”

“The people here will vote for MPs and MLAs who uphold the dignity of human life,” she said.

According to White, Motion 408 may well have been “the straw that broke the camel's back” with regards to the relationship between the pro-life movement and the Harper Conservatives. Regardless of what prochoice Canadians think, he said, “Pro-lifers certainly don't believe anymore that Prime Minister Harper has any kind of secret pro-life agenda.”

Just before noon, the Abbotsford Right to Life bus pulled up outside St. Andrew's Roman Catholic Cathedral on View Street.

Alongside standards like Ave Maria, the assembled sang a variety of life-themed hymns, including one that paraphrased part of Psalm 139: "You know my heart and its ways, you who formed me before I was born."

The Knights of Columbus, who organized the March in tandem with United for Life BC, was a strong presence at Mass; conversely, the Mass was also a central part of the March for Life. In fact, St. Andrew's wasn't large enough to hold everyone who wanted to attend – a second, concurrent service took place at St. Patrick’s Roman Catholic Church a few kilometres away.

“Decades of the abortion culture has dulled our senses,” he said. “Has the culture of death become the new normal for us?”