The National Energy Board, supposedly an independent federal agency, has directly coordinated efforts between CSIS, the RCMP and private oil companies against environmentalist groups and indigenous-rights activists.

O'Neil then ordered the escalation of RCMP and CSIS intelligence measures following the opening of an SPROS/SIR database file. According to the Government of Canada, SPROS is the new National Security Program’s primary database for the electronic storage, retrieval and management of national security criminal investigations and information, and on a required basis, classified criminal intelligence and other sensitive cases.

"It is highly likely that the NEB may expect to receive threats to its hearings and its board members," O'Neil, said. However, in the same memo he states that there is "no intelligence indicating a criminal threat to the NEB or its members" and "I could not detect a direct or specific criminal threat."
In closing, O'Neill advises recipients to discuss their concerns with the security officials at the National Resources May 23rd classified briefing.

"What is particularly chilling about the Harper administration's approach is the conversion of government agencies to private spy agencies for private sector corporations," Green Party Leader, Elizabeth May said, upon learning about the emails. "What is unacceptable is the marginalization, demonizing, and threat of criminalization of healthy debate in a democracy."
On May 23, 2013, Natural Resources Canada hosted a 'Classified Briefing for Energy & Utilities Sector Stakeholders' in collaboration with CSIS and the RCMP at CSIS's headquarters in Ottawa.

The briefing has occurred twice annually since 2005: its stated purpose is to discuss national security and criminal risks to critical energy infrastructure. Attendees include government officials, federal ministries, law enforcement agencies and energy stakeholders with high-level security clearances. These meetings have been described as an opportunity for government officials and companies to exchange information "off the record" and form "ongoing trusting relationships" in the protection of national energy infrastructure.

An agenda obtained by Tim Groves and Martin Lukacs at The Guardian last month revealed that breakfast, lunch and coffee was sponsored by Enbridge and a networking reception held at the Chateau Laurier was co-hosted by Bruce Power and Brookfield Renewable Energy Partners. Meetings during this conference included "challenges to energy projects by environmental groups." 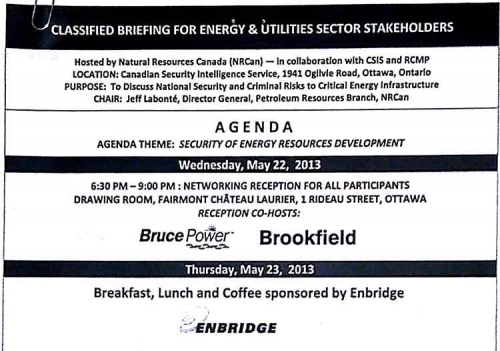 Given proof of CSIS and RCMP intelligence resources being afforded to the NEB, and evidence of disclosure across the private sector, it is undetermined how much information is being provided to corporations such as Enbridge and TransCanada Corporation, and to what extent international entities such as CNOOC are also benefiting.

Since coming to power, Conservative prime minister, Stephen Harper, has used his government apparatus to serve a natural resources development agenda, the Guardian recently wrote, "while creating sweeping domestic surveillance programs that have kept close tabs on indigenous and environmental opposition and shared intelligence with companies.

The National Energy Board has no spying mandate, according to its website, but serves to function as a regulatory agency over the gas and oil industry, answering to Parliament and the Canadian people.