International Women’s Day: “We Hold up Half the Sky” 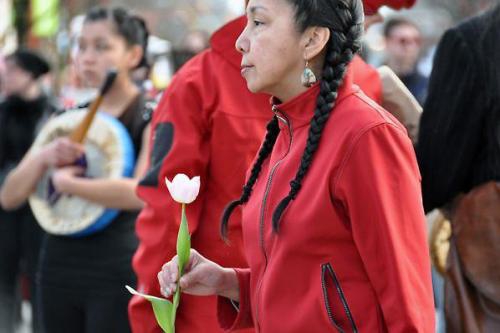 There was a good turnout for the IWD rally and conference last Saturday, March 6, 2010. There was singing and clapping, speeches, and drumming. A wide spectrum of groups was in attendance.

Laura Holland, from AWAN (Aboriginal Women’s Action Network), spoke from the “Nothing to Report” report submitted by the BC CEDAW group which is Committed to Eliminating Discrimination against Women and ensuring the BC government complies with its human rights obligations to women. By the end of 2009, Canada was to have reported back to the United Nations’ CEDAW group on steps it has taken to implement two central concerns:

To date, there has been no government response.

The number one concern is the murdered and missing women and girls. There are 520 known, documented cases of Aboriginal women and girls who have gone missing or been murdered across the country over the last 30 years.

Laura went on to say that the issues are of Olympic proportions and she called for justice, a public inquiry, closure for the grieving families, and an end to the systemic racism that is creating this situation. She said that racist and sexist violence against all women must be stopped. That there have been no new charges since the Pickton trial and the fact that Pickton was not fully prosecuted is a reflection of the systemic racism in British Columbia. More women and children have disappeared since Pickton’s trial. It is an inadequate and embarrassing police and government response for those who have long been aware of the pattern of racist violence against Aboriginal women and children.

Laura closed by calling for the political will to create a change, a commitment to investigating charges of violence immediately, a basic correction in the system, justice and dignity.

Jerilynn Webster sang her poem, “It’s Too Late to Apologize.” She said Indigenous women in Canada are dying. Stephen Harper’s apology to Aboriginal peoples is too late and it was only given so there would be no Human Rights charges laid against Canada. 50,000 Aboriginal children are unaccounted for since the residential school system was implemented. The residential schools taught parents and grandparents a violence that they passed on. Aboriginal peoples can’t speak their own language. Although the system worked hard to install shame in Aboriginals, Jerilynn closed by singing, “Today I can freely say my Indian name.”

Later at the “Women’s Voices at the Table” conference, it was pointed out that violence against women cuts across all stratas of society. In Canada, women’s rights are under attack with funding cuts, failure to establish a National Child Care program, targeted violence against Aboriginal women and on and on.

Participants went into break-out discussion groups with the task of generating collective, doable action on issues to pressure MPs with and to present to the G8/G20 Summit this coming June.

At the Indigenous Peoples table, hosted by Kat Norris, there was a call for an inquiry into Frank Paul’s death and a public inquest into Harriet Nahanee’s death. Harriet Nahanee was a Native elder and activist who died after serving jail time for her role in the Eagleridge Bluffs protest over the Sea-to-Sky Highway expansion. Harriet passed away as a result of complications from pneumonia after being arrested and spending time in a cold cell at the Surrey Pre-trial Centre. Betty Krawczyk, who also served time for her part in this protest, gained wide-spread recognition and praise for her stand while Harriet died unknown and unthanked. This is an example of the insidious racism in our society.