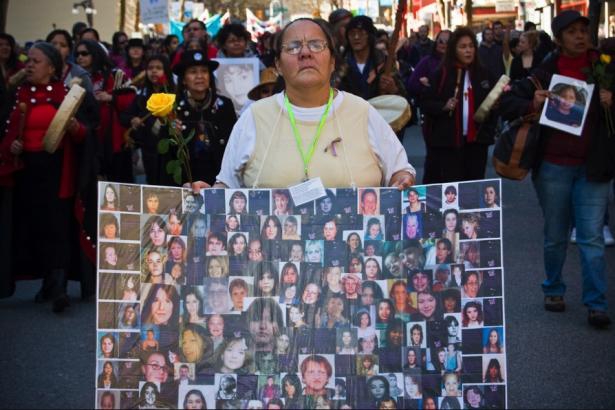 Downtown Eastside activists did not hold back their criticisms of Wally Oppal and his Missing Women Commission of Inquiry at the Commission’s Pre-Hearing on Wednesday night.

Over 100 people attended the hearing, inside a high-ceilinged gymnasium in the Downtown Eastside. It was the Commission’s first public forum, and the first time that Oppal directly addressed the neighbourhood’s residents.

Fifteen people were on the speaker’s list, mostly activists and representatives from women’s rights advocacy groups such as the Women’s Memorial March Committee, Downtown Eastside Women’s Centre, and Battered Women Support Services. Most were women who knew a missing or murdered woman in the Downtown Eastside.

No women who currently reside in the DTES and were not members of any organizations or committees spoke at the pre-hearing. Reporters, community members, activists, and curious onlookers sat side by side in plastic folding chairs, arranged in a semi-circle facing Oppal and the speaker’s lecturn. 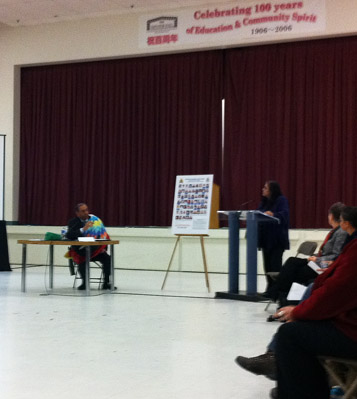 Gladys Radek spoke directly to Oppal during her speech

Bernie Williams, a community activist, was one of the many speakers who weaved her personal experience with political overtones.

“This has been a long journey for a lot of us women,” Williams said, fighting back tears. “Why did it take 69 women, before they acted?”

Fellow Committee member Gladys Radek urged Oppal to broaden the scope of the inquiry to cases beyond the Pickton murders, while narrowing the scope to cases from the Downtown Eastside.

“Terms of reference are many, not four,” said Radek. “We [missing and murdered women] don’t all like being put in the same basket.”

“The women from the Highway of Tears need their own inquiry,” Kendall said. “Your inquiry needs to find out what happened in this particular neighborhood, and do justice to these women.”

The audience applauded Kendall’s speech, as it did for many of the others’. Television cameramen occasionally approached speakers with their equipment, an explicit reminder of the intense media presence and scrutiny at the pre-hearing. An entire wall was dedicated to audio and video equipment, speakers, and journalists jotting notes.

“Do not be detracted from the politicization of this issue around two components, abolitionism and de-criminalization of sex work,” said MacDougall. “You can create as many laws, or take away as many laws as you want, and they still let Pickton go.”

At the end of the three-hour pre-hearing, Oppal made final remarks about the speakers and the Commission.

“We understand the dissatisfaction that has been shown here today,” Oppal said. “The reason we took this on is because we want to see constructive change made.”

Radek believes that the three-hour pre-hearing was not long enough.

“I hope there is a follow up with what we’ve said,” Radek said after the pre-hearing. “Like many have said, three hours is not enough time.”

Asked about the possibility of a public inquiry into the Highway of Tears, Radek did not skip a beat.

“Its going to be up to the people,” she said “It’s going to be us, the grassroots women that are going to make that public inquiry happen.”