When are we "commoners" going to learn to shower ourselves with love, respect and admiration? 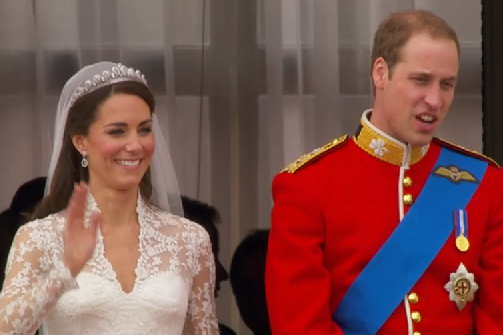 So, I did not wake up at 2 a.m. PST to sip some Pimms, eat scones with clotted cream and watch the Royal Wedding, supposedly watched by millions of viewers around the world. But, I must confess, since this morning I have read the newspapers and watched the slideshows commenting on the lace-trimmed hats, the silk finery and yes, Kate Middleton’s dress, with a mixture of curiosity and perhaps a teeny bit of envy. Yes, it would have been a fun party to be invited to, and how often do I get a chance to wear a proper hat?

What is it about the Royals? Why do we have such a ridiculous fascination with monarchy, even today? I remember having a picture book celebrating Charles' and Diana’s wedding years ago when I was a young girl. I remember thinking how young and fragile she looked even then. And yes, I did mourn with the rest of the world when she died her untimely death.
Yet I wonder why I even cared. As many editorials have pontificated over the last so many years, what purpose does the monarchy serve? Do we care only because we are made to believe that we should? Do we care because somehow the Queen of England represents the nostalgia of another age? Do we care because we want to be part of the rarefied world that she and her family inhabit?
I’m not certain of the answer. What I do know is that it all seems a little ridiculous to me. This idea that there should be official representatives of a state, whose sole purpose seems to be being photographed endlessly by the media, to serve charities and to become figureheads of a nation’s hopes.
In fact, isn’t that why this wedding became a global focal point? The Guardian UK’s headlines say it all: “Royal wedding was a moment of light in the economic gloom." Other newspapers gushed that the wedding had resown a country together after the tragic end of Princess Diana and Prince Charles’ marriage, that this romance was going to somehow create a happy future for the Royal family and in turn for the country of England.
It’s not so far-fetched is it? The last time I felt this sort of global coming together, though in a much more powerful way; was during the last U.S. elections, when President Barack Obama was elected. When all around the world, we marveled at this incredible story of a humble man, a black man entering the hallowed, white boys only club of American presidents. Of how he had survived all polls, all forecasts and beaten all odds. Of how he was going to change America and change the world.
Many months later, I may not agree with all of Obama’s decisions – as I write this, I sit close to the shores of southern California, where I watch oil rigs offshore leak tar onto the kelp strewn beaches of Los Angeles and bemoan the fact that even Obama favours U.S. oil exploration. Yet I am still hopeful. He’s getting them health care, isn’t he? He's working on green energy resources. And navigating the constraints of an opposition party that is increasingly becoming more and more vitriolic and conservative. Besides, he deserves merit, he’s worked for it.
Which brings me back to the Royals. After all, what have they – at least this generation – worked for? What is their privilege worth? They've only been born into it.
Britain's Conservative government seized the day and cast the Kate-William wedding as a big celebratory party, the silver lining in England's economic doldrums, and gave the English not only the day off but also a wild card to host street parties and more.
Yes, in a country that loves their neighbourhood pubs and whose capital city boasts exposed street urinals for men to relieve themselves on Saturday nights, perhaps a party is the best reason to forget everything. But is that all we're good for, I mean, us global "commoners" -- yikes, there's that archaic word -- quoted so widely in the press. "Commoner to marry Royal."
Give us an excuse to party and we'll join in? Give us pure escapism (I thought that was Hollywood and Bollywood's job) and we'll rise up from the indignities of our daily lives and succumb? Are our lives really that miserable?
Or perhaps it is simply that we want to be part of something
collective, something larger than ourselves. We want to come together over some common cause.
It may be so. But while I do love scones and tea and I wish the prince and princess well, I can't wait for something of real significance to come along.
Perhaps  when we replace Stephen Harper with a politician who really cares about our country and its people and our natural resources, perhaps if we all get off our butts and realize that the only way to get healthy is to eat less, eat better and move more, perhaps when we decide once and for all that the current economic recession is because of an unsustainable way of living, working and being, or perhaps when we discover that we're not "commoners" at all, but royalty in our own right each deserving of the same amount of respect, love and consideration that we so readily bestow on our media stars -- perhaps then we'll really have a reason to celebrate.
Read More:
Share on Facebook Share on Twitter