Taking advice from a popular local website, the city's tourism staff set out to show that despite the images of burning cars and smashed windows during last week's riots, Vancouver remains a go-to destination for tourists. Vancouver is Awesome managing editor Bob Kronbauer wrote: "Last week our friends at The City of Vancouver reached out and asked if there was a way that they could let all V.I.A. readers – and the whole city – know how much they appreciate the support, that we as a city will move on and will keep showing that Vancouver is awesome. We suggested a simple letter in the form of a blog post." 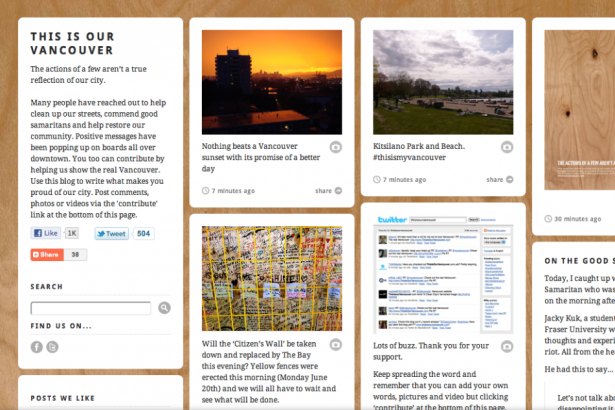 Screenshot from This is Our Vancouver site

An independent review will look at the planning that led up to the Stanley Cup riot last week, including whether recommendations that emerged after a similar riot in 1994 were ever enacted.

The B.C. government says the review will also look at the role the availability of liquor might have played and at the Vancouver Police Department's plans for Game 7.

Robertson is being accused of avoiding questions about the city's planning for the event, which included giant outdoor TV screens which drew more than 100,000 people to the city centre last Wednesday.

The review is to be completed by Aug. 31, and the province says it will be made public, unlike a report on 1994 Stanley Cup riot, which has never been released.

Chu has said he was responsible for making policing decisions, and the department has issued a terse statement saying there is no truth to rumours that there was any political of bureaucratic interference in police planning.

Images of vandals tearing through the downtown core, smashing windows, burning cars and assaulting Good Samaritans have been broadcast around the world.

In an attempt to counter the negative images, Tourism Vancouver has launched the website, www.thisisourvancouver.com.

"The actions of a few aren't a true reflection of our city,'' says the website, which features an ever-revolving array of positive comments, photos and videos posted by members of the public.

"Many people have reached out to help clean up our streets, commend Good Samaritans and help restore our community. Positive messages have been popping up on boards all over downtown.''

"Our intention of getting involved with this was really good will,'' said Amber Sessions, manager of travel media relations Tourism Vancouver.

"From Tourism Vancouver's perspective, we know that our image around the world has been somewhat tarnished in the past week. You know, certainly, we spend our energy trying to get Vancouver in the news around the world for being beautiful and friendly and welcoming, and a great travel destination, and we were on all the front pages for all the wrong reasons last week.''

Police have also received about 3,500 emails from the public, which include 53 attached videos, 676 links to YouTube, 708 images and 1,011 hyperlinks to help identify rioters.

There has been an outpouring of public disgust over the riot, and many of the rioters are also being identified by friends and acquaintances in photos posted on a number of websites. In some cases, addresses and personal information are also being posted for all to see.

In at least once case, a young athlete has gone public to apologize after photos went viral showing what appears to be him trying to light a police car on fire.

Const. Lindsey Houghton says police are aware of but don't condone websites that include vigilantes' postings.