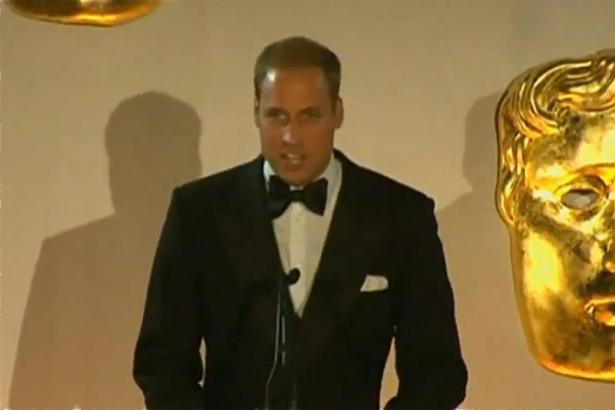 There are no massive, adoring crowds and no free-form, public walkabouts, but the U.S. did manage to offer the touring royal newlyweds something that Canada didn'ts: movie stars.

LOS ANGELES -- Hollywood royalty mingled with the real thing as the Duke and Duchess of Cambridge spent a sun-splashed day on the polo fields of Santa Barbara County, followed by a diamond-studded night amid movie glitterati at the midpoint of their tour of California.

Prince William wowed the crowd with four goals at his charity polo match then he and the former Kate Middleton headed by helicopter to downtown Los Angeles for a black-tie film industry event that drew Nicole Kidman, Tom Hanks, Barbra Streisand, Jack Black and Jennifer Lopez, among many others.

On Sunday, the royal pair will go from the ritzy to the gritty --the royal couple will watch a dance at a non-profit academy in the Skid Row area of downtown.

"There's so much compassion in both of them,'' said Los Angeles resident and royal-watcher Christian Kang. "I know they're going to Skid Row, and I think that's very good to see from someone in his position.''

They're also slated to attend a job fair for U.S. servicemen and women transitioning to civilian life.

Saturday night's soiree at the restored 1920s-era Belasco Theatre in downtown Los Angeles was organized by the British Academy of Film and Television Arts, of which William is president, to promote up-and-coming British talent in the industry.

The duchess wore a flowing lilac dress with white waistband by Alexander McQueen. Fans cheered as they strode a red carpet and the couple responded by walking over and shaking a few hands.

"Before I start, I'd just like to thank Colin Firth for my opening line: I have a voice,'' William quipped in brief remarks to the star-studded audience, referring to Firth's role as King George VI in the acclaimed film "The King's Speech.''

The guests included executives of major studios and entertainment companies along with such luminaries as James Gandolfini, Don Cheadle, Blake Lively and Kristin Chenoweth.

Earlier, up the coast at Carpinteria near Santa Barbara, William's four goals led his team to a win in the overall polo match at the Santa Barbara Polo & Racquet Club.

"My father, the Prince of Wales, and my brother, Harry, were as green as that grass outside when I told them I'd be here today,'' William told a reception where guests sipped champagne and whiskey. "Catherine and I have had a busy few days -- so the prospect of being able to let loose this afternoon is wonderful for me.''

After William's win, the crowd rushed onto the field despite an announcer's pleas for them to return their seats, and finally security used a line of rope to push them back. And a fight nearly erupted between a photographer and an aggressive spectator jostling for a look at the couple.

After decorum was restored Middleton, presented each competitor a blue Tiffany & Co. box with a white ribbon, and a big silver trophy to her husband's team, and gave William a kiss on each cheek when egged on by the crowd.

William wore a white shirt and trousers with a blue blazer while his wife sported a silver and marble-grey hand-painted silk dress by British designer Jenny Packham.

The cheap seats cost $400, while anyone paying $4,000 for a VIP ticket got a chance to hobnob with William and his bride.

Carolyn Sesvold flew in from Chicago to attend the match, buying a brown-and-white polka-dotted dress, hat and gloves inspired by the outfit Julia Roberts wore to the polo match in the movie "Pretty Woman.''

Sesvold, a royals fan, also came to watch a family friend who paid about $50,000 to play against William in the polo game. Those playing on the same team as the duke paid twice that, she said.

Cheryl Reyes, who works in an office in Orange County, bought her $400 ticket as soon as she heard the royal couple would be coming to Santa Barbara. Standing across the field nibbling on a sandwich and drinking a flute of juice, she worried about whether she'd be able to see the duchess.

"I wanted to see Princess Catherine,'' she said. "There's just something magical about being a commoner and ending with a prince. She's the one I want to see.''

Both Prince William and his brother, Prince Harry, regularly play polo during the summer months. Their love for the sport comes from their father, Prince Charles, who played polo for 40 years before stopping in 2005. Prince Charles broke his right arm during a fall from his horse during a 1990 match, among several polo-related injuries.

The duke and duchess arrived in California on Friday after a nine-day trip to Canada, their first foreign excursion since getting married in April.

Actor Billy Zane said he was pleased that they visited Southern California after their wedding. "It's nice to be able to host them here,'' he said. "I'm thrilled they showed up so soon.''

William and Kate's arrival in California has been a lower-key affair compared to the largely rapturous welcomes they received as they crisscrossed Canada, though small crowds of royal watchers waving British and American flags congregated outside the British consul general's home in Hancock Park and elsewhere.

Though Prince William has been to America before, it is Kate's first trip to the U.S. William's late mother, Princess Diana, who would have turned 50 this month, charmed Americans when she visited in the 1980s.