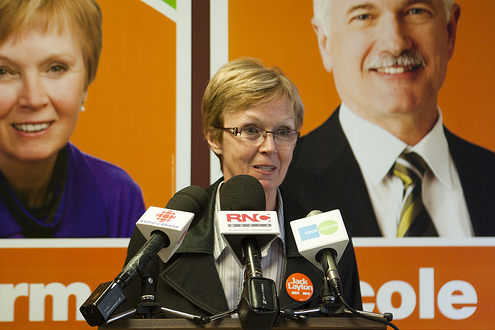 As a woman takes the helm of the NDP, during Jack Layton's leave, other women are applauding the party's choice.

"I think Nycole Turmel is a great choice," said Linda McQuaig, a Toronto-based journalist and writer who recently co-authored The Trouble With Billionaires. "She's a union person, and from a public sector union, at a time when the public sector is really under attack. She's a woman, and a staunch defender of pay equity."

She said that the appointment of Turmel sends "a good, clear message where NDP is coming from," in light of Prime Minister Stephen Harper's series of cutbacks to women's programs.

Turmel, 69, is the first woman ever to lead the Public Service Alliance of Canada (PSAC), the country's largest federal union. She fought activity for equal pay for women and played a crucial role in getting the union a $3.6-billion pay equity settlement in 1999. She was elected PSAC president in 2000, and led the union into a national strike four years later, helping PSAC win an annual federal government contribution to the union's social justice fund.

Her political career with the NDP is relatively recent: she won her seat under the NDP banner in the electoral district of Hull—Aylmer in May. Her win marked the first win by a non-Liberal candidate in 120 years.

McQuaig said she isn't worried by Turmel's relative lack of political experience. She said she's a big fan of veteran NDP representative Libby Davies, but said that the party would be divided over whether to appoint Davies or Thomas Mulcair, who are both joint deputy leaders of the party.

University of Ottawa social science professor Claude Denis also said in Le Droit that the choice of Turmel "made a lot of sense."

"Ms. Turmel has a significant experiences in leadership and the management of a large organization," he said. "It's about getting someone very competent over the course of the next several weeks."

During the last election, Turmel came under fire from her Liberal opponent Marcel Proulx for supporting parties Bloc Québecois in 2006 and Québec Solidaire, but she has asserted that her support was for the parties' progressive policies and not their separatist goals.