In BC, party is six points ahead of Tories. But it's not clear if the sentimental bounce will last. 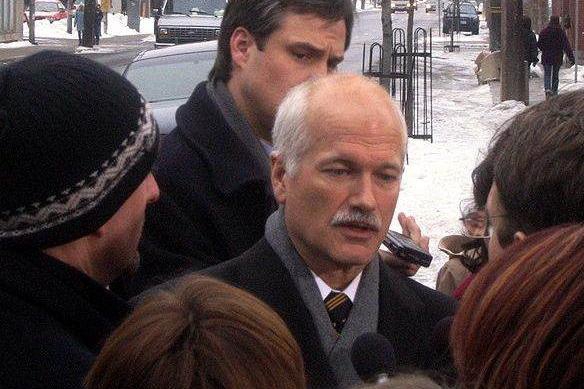 They loved his party during the last election campaign, and now it appears that Canadians love Jack Layton's NDP even more after his untimely death to cancer.

But it's not clear whether that's a brief, sentimental reaction, or a lasting political legacy.

The Canadian Press Harris-Decima survey pegs support for Layton's NDP at 33 per cent -- tied with the ruling Conservatives and well ahead of the Liberals at 21 per cent.

That's almost a three-point gain for the New Democrats since the May 2 election, which vaulted the party into official Opposition status for the first time in its 50-year history.

The Tories are down almost seven points while the Liberals are up two.

Harris-Decima chairman Allan Gregg said the NDP gain is most likely attributable to "the Jack effect.''

"The national outpouring of emotion we witnessed over Jack Layton's untimely death appears to have translated directly into increased support for the party he leaves behind,'' Gregg said.

"However, it remains to be seen whether the NDP can consolidate these gains in his absence.''

Layton was felled Aug. 22 by an undisclosed form of cancer. Thousands of Canadians lined up for hours to file past his coffin in Ottawa and Toronto, thousands more left flowers and messages of condolence at spontaneous memorials throughout the country.

Prime Minister Stephen Harper accorded Layton the honour of a state funeral, which at times resembled a partisan political rally.

The telephone poll of just more than 2,000 Canadians was conducted Aug. 18-29, in the midst of the mourning.

A sample this size is considered accurate within plus or minus 2.2 percentage points, 19 times in 20. The margin of error is larger for regional results.

The poll indicates the NDP managed to sustain its historic gains in Quebec, which handed the party 59 of 75 seats in the May 2 election.

Support for the NDP in the province stood at 41 per cent, the poll suggests, compared to 23 for the Bloc Quebecois, 15 per cent each for the Liberals and Conservatives and six per cent for the Greens.

In Ontario, Gregg said the NDP is more competitive than at any time in its history. The Conservatives were at 34 per cent, followed closely by the NDP at 30 and the Liberals at 29. The Greens were at seven.

In British Columbia, the poll suggests the NDP were leading with 40 per cent, six points ahead of the Tories. The Liberals were at 20 per cent and the Greens at five.

The NDP were also leading in the Atlantic region, with 40 per cent to the Tories' 33, the Liberals' 22 and the Greens' eight.

The Conservatives, however, continued to hold a huge lead over all other parties in the three Prairie provinces.

Gregg said it remains to be seen whether the bounce in NDP support reflects "an emotional response to Jack Layton's death or is it a larger kind of embracing of what Jack Layton was portrayed to represent around the time of his death?''

Other polling Gregg has done suggests Canadians are genuinely fed up with "partisanship and negativity.'' He noted that Layton was seen during the last half of the election campaign as a cheery, optimistic, positive political leader, qualities that were eulogized repeatedly last week.

"If that is something that is causing people to gravitate toward the NDP, it suggests it's going to be that much harder to replicate without him,'' said Gregg.