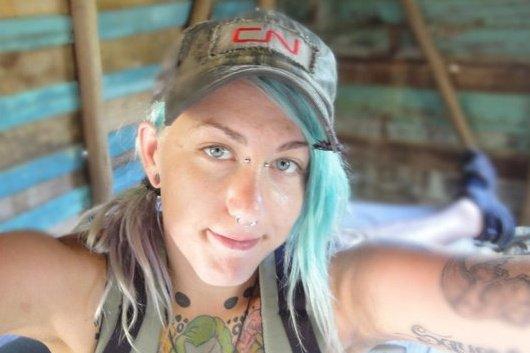 One week after the death of Ashlie Gough, 23, at Occupy Vancouver, her family has confirmed to the Vancouver Observer that she died of a heroin overdose, but said they find some media and politician portrayals of Gough “upsetting.”

The newly released toxicology report, provided late this week to Gough's older sister Tiffany Woodward, confirm there was no foul play in her death and that she died of a drug overdose. But her family insisted the 23-year old artist should not be a “poster child” for Occupy Vancouver, nor should she be used against the camp in the election campaign.

“What happened with Ashlie was nothing to do with the protest – it just happened to be at the same spot,” Gough's father Tom Gough told the Vancouver Observer. “Some articles said, 'Here is a perfect example of blah, blah, blah -- of how (Occupy Vancouver has) gotten out of control.”

“(Ashlie) wasn't an activist. She had nothing to do with those things. She was just visiting her friends. It would have been really upsetting to hear things that are so inaccurate.”

Gough was found unresponsive in her tent by Occupy Vancouver medics around 4 p.m. on November 5, who performed cardiopulmonary resuscitation for 10 minutes until paramedics arrived. However, autopsy results suggested she had died in her sleep up to 12 hours before.

“I didn't know that she had used hard drugs,” said Tom Gough. “I wasn't terribly surprised to find out she had.”

“She was what she was, I'm not denying that. (But) there's a big difference between being an occasional user at a party a couple times a year versus the media's depiction of a drug addict.”

Gough said he hopes that more accurate media portrayals can show who his daughter was, not what politicians and activists would like her to be.

“She went to Vancouver basically as a tourist with her boyfriend,” he said. “She was there for one day, and spent one night there visiting friends who happened to be down at Occupy Vancouver. I'm just devastated by her death period, it doesn't really matter how. A tragedy is a tragedy -- such a beautiful young lady who goes through life doing her own thing, and really really living it.”

Her boyfriend, Kegan Munro, describes Ashlie as an artist, scuba diver, traveler and body modification enthusiast who was hoping to work in that field. She also loved riding the rails – train-hopping freight trains across the country with friends described as “crust punks.”

“She was so happy when she was hopping,” Munro told the Vancouver Observer, adding that she train-hopped with her dog, Xavier, whom she rescued in Montreal four years ago. “She had him by her side every day before I met her.”

Her father, a country musician and world traveler himself, said that seeing his daughters photographs from one train-hopping voyage from Vancouver to Halifax and back revealed her love for life and adventure – reminding him of hobos in the Great Depression and Beatniks in the 1960s.

“I just took my hat off to her and said, 'Holy smokes!'” Gough said. “Here I thought I'd done some traveling in my life. That is just so awesome.”

“She had photographs of hanging out a boxcar door and taking a picture of the long, long freight train up ahead going around a slow curve. All these character people – sitting around in the camps. Of course they're all tattooed up, dressed in rags and sitting around with a big bottle of Jack Daniels and a couple banjos and guitars.”

Gough recalls taking Ashlie for her first ear piercing when she was a young girl, which soon led to eyebrow rings and tattoos. Although he was resistant at first, he said, cautioning her at time that she was too young, he later realized body modification was as much a part of her expression as how she dressed or decorated her bedroom.

“In the last couple of years, I realized this is her life, it's how she lives, how she expresses herself. Everything she did, she was an artist. Anything she did was a form of art.”

Ashlie and her sister, Tiffany, were adopted by Tom Gough when Ashlie was still a baby. The family then moved from interior B.C. to Victoria, where she grew up singing her father's country songs, climbing trees and dancing at outdoor festivals, Gough said.

Although Ashlie had lived on the streets of Victoria as a teenager, when Munro first met her at a McDonalds on Douglas Street – a popular hang-out for punks and street kids – she had since moved into his Victoria apartment, where she loved to play music with other musicians in their community. Woodward gave her little sister a banjo, which she lugged across the country alongside her dog.

The Goughs said they will hold several memorial gatherings for close friends and family in the coming weeks, but said they wish to keep them private due to the media's interest in the incident.

At the Occupy Vancouver encampment at the Vancouver Art Gallery, a growing shrine remembering Gough has been set up by her friends there -- with candles, a cross and messages of condolence.