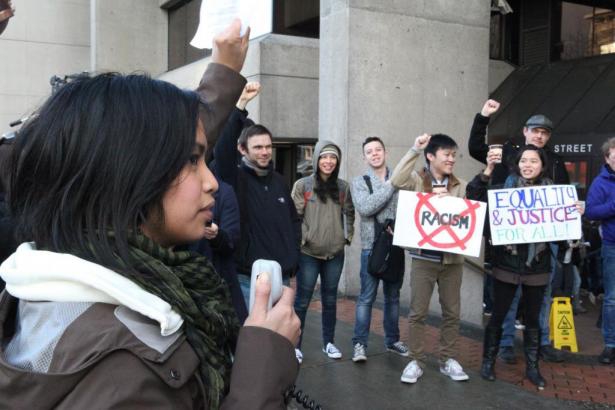 Nearly 50 people rallied outside the provincial courthouse this morning to protest members of the white supremacist group Blood and Honour, who are on trial for a string of assaults, including setting a Filipino man on fire --then beating a black man who came to the rescue, in 2009.

Organized by a number of Filipino groups in the Kalayaan Centre, the rally called for tougher police and government action against organized hate groups in B.C. Inside the courtroom, lawyers for the accused -- Robertson De Chazal and Alastair Miller – appeared, and the case was postponed until March 12.

“We're here to stand and condemn all acts of violence and racism-based hate crimes,” said Christina Panis, from the Philippine Women's Centre of B.C., which organized the demonstration. “Unfortunately, this (racism) is a reality of migrant and immigrant communities in 2012.

“This is a matter of public safety that's not being taken seriously. We need a resurgence of activism and organizing in the community, so we're not complacent but proactive – not reactive – to racist events.”

Ana Linares, speaking on behalf of the Raíces Latin American cultural society, questioned why it took three years to charge the Blood and Honour members, when so many police resources were being poured into catching Stanley Cup hockey rioters.

“Supposedly, we live in a multicultural society, but often these multicultural policies tend to focus on superficial aspects of our differences – our clothing, our food, our music,” Linares said. “Sure, those are great things to share, but we never really talk about racism in itself in our education system and communities. It impacts all communities regardless of the colour of your skin.”

“I find it appalling that we live in a society that values private property more than it does human dignity. It's time that all marginalized communities and anti-racist communities come together.”

The protesters were buoyed by a donation of free coffee for their cause by J.J. Bean on Commercial Drive, where the series of assaults on people of colour – including Hispanic, black and First Nations individuals – took place. Members of the Filipino Canadian Youth Alliance and the Philippine Women's Centre led boisterous chants as another group carried a banner reading “Nazis [expletive] off.”