He's been criticized and celebrated, both for his vocal opposition to oil sands pipelines, and his controversial call for the NDP, Liberals and Greens to work together. VO sat down with B.C.'s hopeful to replace Jack Layton. 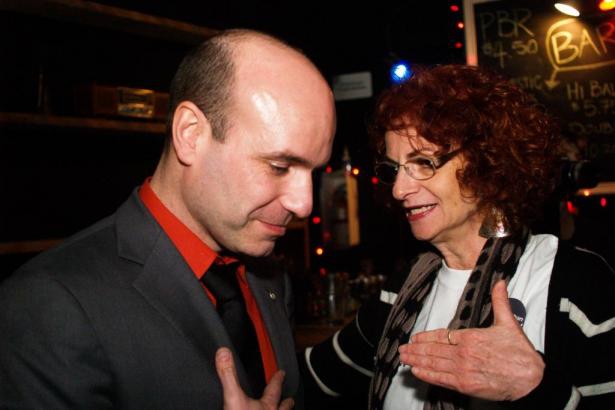 He may not yet be seen as a front-runner in the New Democratic Party's race to replace late leader Jack Layton, but Smithers, B.C.'s Nathan Cullen has been turning heads lately – both for his controversial proposal for electoral cooperation, and for his high-profile opposition to the equally controversial Enbridge Northern Gateway pipeline.

On Friday, the longest-serving Member of Parliament in the party's leadership race will speak before the pipeline's joint review panel. At a campaign fundraising concert in Vancouver last night, attended by 100 local supporters, Cullen turned a few more heads with his non-stop dance moves; by 10:30 p.m., the father of two 17-month old twins was still on the dance floor.

Last weekend, the four-time elected politician sat down with the Vancouver Observer to talk about his leadership bid, his controversial positions, and his vision for a green economy.

Firing up talks for electoral reform

“We need a one-time offer to get into government and change the voting system.

“I've suggested that we have run-off elections before we have campaigns in Conservative ridings. That's a very post-partisan, evolved kind of politics – it's hard for people steeped in partisanship to come to; you've got to ease them into the conversation. But it guarantees a cooperative or progressive government.”

His vision for electoral reform isn't fully fleshed out yet -- “Some form of mixed member proportional representation – something that says, 'When you vote, your vote will be reflected in the parliament'” -- but Cullen said that his campaign is about starting a conversation, not ending it.

Fellow candidate Peggy Nash countered his proposal this week, telling reporters that cooperating with other parties would force voters to choose parties they might not support.

“What it would mean is it would deny a democratic choice to Canadians,” Nash said.

“In ridings where his plan would be in existence, (they) would not be able to vote for the party of their choice.”

Elected in 2004 for the Skeena-Bulkley Valley riding, Cullen has faced his share of challenges – and good luck – over the years. The 39-year old small businessman represents a gigantic riding the size of Norway, covering the communities of Prince Rupert, Terrace, Kitimat, Smithers and Haida Gwai. The riding includes significant Indigenous populations, as well as many communities reliant on mining and forestry jobs.

Describing himself as “pro-business” and “environmentalist” -- and someone heavily inspired by elders in First Nations communities throughout his riding – Cullen hopes to show that economy and environment are not mutually exclusive.

“Coming from a small business background, I'm as comfortable in rooms with business types as with environmentalists,” Cullen said.