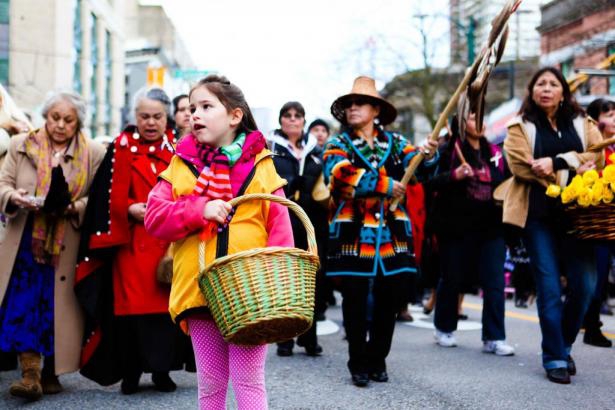 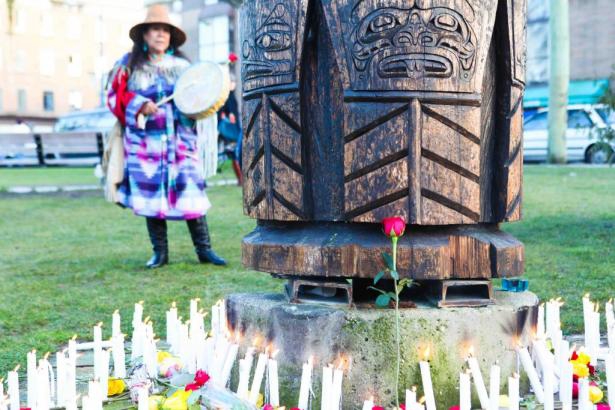 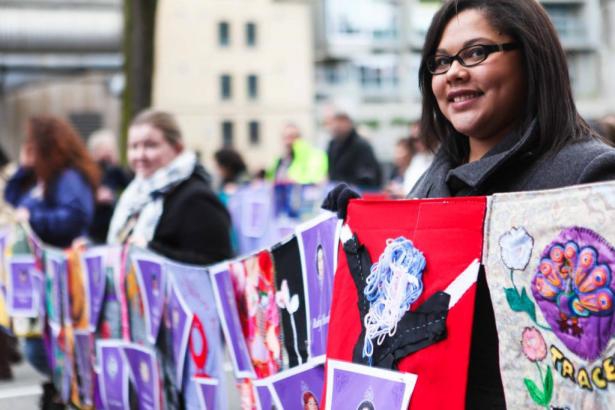 Vancouver's streets pulsed with hundreds of drums and singing voices on Tuesday as nearly 5,000 people joined the Women's Memorial March to honour hundreds of missing and murdered women, only a day after groups blocked Georgia and Granville Streets for five hours to protest against the Missing Women's Inquiry.

The Vancouver Observer has also learned that former Robert Pickton employee (and would-be informant) Bill Hiscox – who attended the march with missing women's families – may be allowed to testify this week at the Inquiry, after he was initially rejected from the witness list. Hiscox unsuccessfully offered police information and help in 1998, he said, four years before the serial killer was arrested.

Pausing outside the Regent Hotel near Hastings and Main Streets, one of many ceremonial stops on the route, First Nations elders prayed near the spots where two women – Verna Simard and Ashley Machiskinic – fell to their deaths one year apart in separate but suspicious incidents.

“Ashely (Machiskinic) loved my children,” Machiskinic's aunt, Trina Strongarm, told the Vancouver Observer. “She used to come visit me to see them all. She sowed a lot of joy – she was very cheerful and loved her family very much.

“I'm here to honour her – to show that the missing women are all part of us, and I'm just very grateful that everybody's here to share that.”

Standing beside Strongarm, another relative of Machiskinic added his thoughts.

“I remember Ashley when she was just a little baby, when she was in Pampers,” recalled Kyle Desjarlais, a cousin of Machiskinic's. “She had these big, beautiful eyes.

“I wanted to support people. I have a couple of sisters who passed on down here, through drugs and alcohol. As a guy, I want to just be some kind of support – to show my love, my respect.”

The Women's Memorial March has been held annually since 1991, when community groups began calling for police to investigate dozens of women – mostly First Nations sex workers – who had gone missing from the Downtown Eastside. As the numbers of missing women rose, the memorial march grew in size. It's largest turnout yet was during the 2010 Olympics, when an estimated 6,000 people joined the march.

This year, the march took place during the fifth month of the Missing Women Commission of Inquiry, where families of missing women – many of whose DNA was found on serial killer Robert Pickton's farm -- testified that their concerns were dismissed and minimized repeatedly by the police. Commissioner Wally Oppal suspended the hearings during the memorial march.

Among the large crowd – many wearing Indigenous regalia and carrying hand drums – was former Robert Pickton employee Bill Hiscox, who went to the police in 1998 offering to be an informant against Pickton, who he suggested was killing sex workers.

“I'm here to offer my support to the families,” Hiscox told the Vancouver Observer. “Certainly, we need to bring attention to the Vancouver police and the RCMP to make sure this won't happen anymore.

“We can't tolerate this kind of stuff – they knew they had Pickton in '97, but allowed him to somehow slip away and continue murdering women right up until 2002, which for the life of me I cannot fathom. It's like I'm standing here going, 'Can you hear me now?! It's too bad that you had to wait all this time to do something about this.' There were needless lives wasted because of their stupidity.”

Hiscox remembers attending Pickton's pre-trial hearing in 2034, and said he is haunted to this day by knowing police failed to accept his help six years – and many women's deaths – earlier.

“When Willie was first arrested (...) they brought him into court,” Hiscox said. “And the reason I went is I wanted to sit there and I wanted him to see me – I wanted to look at him and let him know that it was me (who helped turn him in).

“He saw me. It feels really good to know I've done something good in my life. Today, it's important to be here.”

Hiscox revealed to the Vancouver Observer that, despite initially being rejected from the commission's witness list, he was invited this weekend to submit an affidavit at the Commissioner's office, and may, in fact, testify on the stand this week.

While Pickton's admission of killing 49 women weighed heavily on the minds of many, many other women have gone missing over the years -- the national number stands near 600, according to the Native Women's Association of Canada. Many speakers during the march pointed to larger, systemic reasons behind the high murder and disappearance rate among poor, Aboriginal women.

“The public inquiry taking place right now is projecting out a lot of the injustice, things the system should have done to prevent a lot of the deaths that took place,” said Carol Martin, a member of the march's organizing committee and a victim services worker with the Downtown Eastside Women's Centre. “Our system really needs to start changing – they really need to start looking at lives, versus material stuff."