NDP is firing a series of salvos against the Senate on the floor of the House of Commons, calling for reform of the unelected Upper House (a long-standing policy of the party). No discussion of the robo-call scandal yet (the governing party sets the Commons agenda, so we'll have to wait until Question Period in half-an-hour. Neat to see so many very young parliamentarians cutting their political teeth on the floor.

Found my way through a snow-storm and labyrinthine hallways of the centre block of Parliament, finally finding the "Hotroom" - a large workroom for media. There are photos from eons past of all the journalists reporting from the Hill. Nearby is a writer for the Hill Times, a very strong paper reporting exclusively on Parliament Hill and producing strong journalism over the years.

Behind me, Postmedia's reporter seems to be on a hot trail with the electoral reform scandal, pretty exciting to see behind the scenes as journalists chase leads and scoops. As I posted my second article on the scandal - crunching the numbers on the Conservative's closest scandal-linked victories - the number of ridings affected rose to 36, then 38, as soon as I hit publish!

Members of the Liberal opposition in Senate raised criticism that the bill's mandatory minimums remove all power of judges to consider complicated factors in criminal cases. Senator Joan Fraser (Liberal) repeatedly proposed amendments, arguing that the bill further criminalizes people with mental health issues and fails to address the causes of crime or prison problems.

All motions were, predictably, voted down with a chorus of vigourous "NO"s (reminded me, strangely, of a herd of lowing cattle). I expected to be in some kind of public gallery. But in fact, there were only a few dozen voices at the table, and I was ushered to a seat within arms reach of the closest Senator. Whoa.

I spoke to Senator Fraser during a break. She repeated her case against mandatory minimums - and said that, as frustrating as it is to have all amendments voted down by the Conservative majority, it is still vital to have dissenting criticism put on record. Ultimately, she told me, the point is to force the government to explain and rationalize their sprawling omnibus bill. 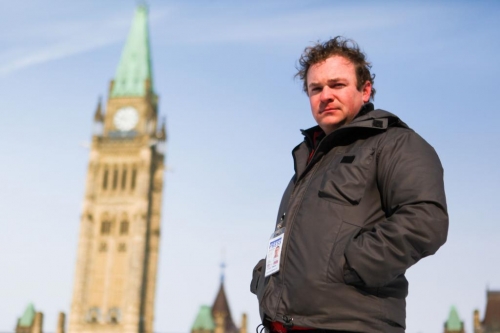 Got press pass - and bantered with the press staff about what's coming up today and the excitement for Question Period, when opposition parties will get to question government on the scandal. Thanks to Rabble.ca's progressive parliamentary reporter, Karl Nerenberg, for vouching for me to get in. We chatted this morning about the significance of the robo-call scandal - out of a long line of scandals in Canada's history, this one's about democracy itself.

Heading into Ottawa to get the low-down on what Parliament Hill is like under the Conservatives. The visit was planned long in advance of the so-called RoboGate scandal (or 'Robo-Con' as other outlets have named it). First stop, the Parliamentary Press Gallery to get accredited with a press pass. It's blue and on a metal chain - and gets me access to committee meetings, a press work room (the "Hotroom"), and past security.