After 800 complaints of misleading phone calls on election day, the head of Elections Canada appeared before the House of Commons' standing committee on procedure and House affairs to answer MP's questions and clarify the situation. The Vancouver Observer reports from the committee, where chief electoral officer Marc Mayrand talked about fraudulent calls, voter fraud and democratic integrity. 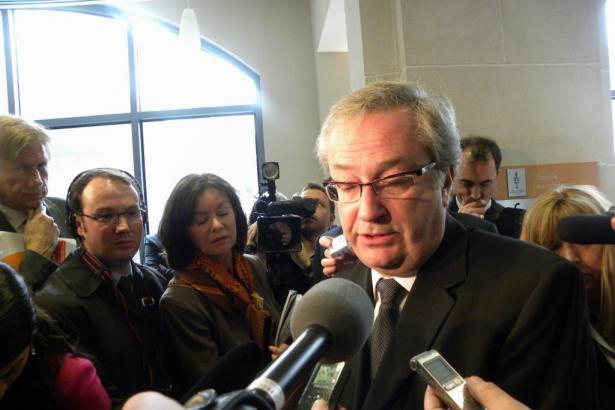 In the robocall committee today in Ottawa, chief electoral officer Marc Mayrand told parliamentarians that Elections Canada has received 800 complaints about incidents of misleading calls and 40,000 ‘contacts’ from Canadians expressing concern over the allegations of voter fraud.

Though tight-lipped throughout the meeting, Mayrand gave a flash of emotion while responding to a question about the riding of Guelph.

“It is a serious matter whenever a single elector is being denied their fundamental right to vote,” Mayrand said.

Guelph is the nerve-centre of what has become known as the “robocall scandal.”  More than 7,600 calls directed voters in the riding to the wrong polling stations.

When MP Marc Garneau, the Liberal vice-chair of the procedure and House affairs committee, asked if Elections Canada would allow the identification of robo-calls fraudster "Pierre Poutine", Mayrand responded that he can't say at the moment.

But Elections Canada has now obtained records from Rogers Communications, and is on track to find out who the caller was.

If the Conservatives thought they could avoid media attention by scheduling the robocall committee during the federal budget lockup, they appeared to be mistaken: roughly 40 reporters from media outlets across Canada were at the Standing Committee on Procedure and House Affairs on Thursday morning as it met to hear Mayrand's testimony.

Thursday is when the government releases its much-anticipated federal budget, meaning that most of the media in Ottawa will be sequestered without Internet access in a lockup from early morning until mid-afternoon.

Mayrand said that he could have come to the committee any other time- it didn’t need to be today.

Committee members raised a number of different issues throughout the meeting including the procedure Elections Canada follows upon receiving a complaint, whether it has the power to call for by-elections in ridings if voter fraud is found to have taken place and the status of the investigation so far.

Throughout the meeting, Conservative MPs focused their questions on the difficulties of maintaining accurate voter registries.

Conservative MP for New Brunswick Southwest John Williamson raised the question of whether it’s possible for voter lists to get mixed up between ridings, so that a party calls people it believes to be in its riding but who are actually in another riding.

Of the committee’s members, seven are Conservatives, four are NDP MPs and one is a Liberal.

“Our position is that we want to get the results in as quickly as possible,” said Tom Lukiwski, Conservative MP for Regina-Lumsden-Lake Centre. “The opposition has, in our view, been conducting nothing more than a smear campaign.” 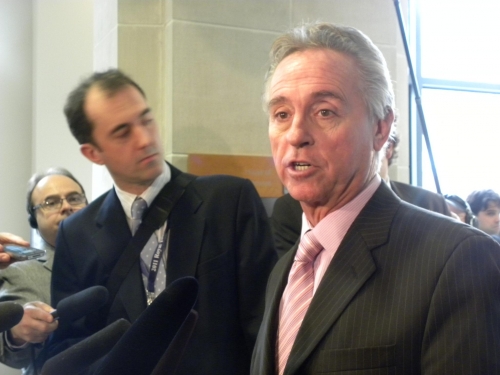 “The quicker that we can get this investigation concluded and the results back, the quicker it’ll prove exactly what we’ve been saying all along- that we had nothing to do with this,” he said.

The subject of smear campaigns came up again during the meeting, when Del Mastro suggested in his statement to Mayrand that Elections Canada had been leaking information about the investigations to reporters.

“The lack of evidence is an unsubstantiated smear campaign,” the prime minister's parliamentary secretary, Dean Del Mastro, said. “Will you confirm that things will be kept in the strictest confidence, following allegations of leaks?”

However, many at the committee said that they felt Del Mastro’s allegation was an attempt to divert attention from the real issue at hand.

Downplaying the scandal
“They seemed to want to play it straight at the beginning, then they threw a couple of shots in there about how maybe this wasn’t so important and a couple of shots about how this was a circus,” said NDP MP David Christopherson, chair of the House of Commons public accounts committee and a former attorney general for Ontario.

“I think Canadians would have been better served if we’d just stayed focused on the issues,” he said.

The committee members did manage to agree on one thing: they supported a motion to invite Mayrand back to the committee to give an update before the House of Commons rises for summer recess in June.

“The political drama will take its natural course,” Christopherson said. “What really matters to Canadians is that they’re assured that the proper officials are on this case, and it’s being investigated and that no one is going to back off until we get to the bottom of this. I think we got that assurance today.”