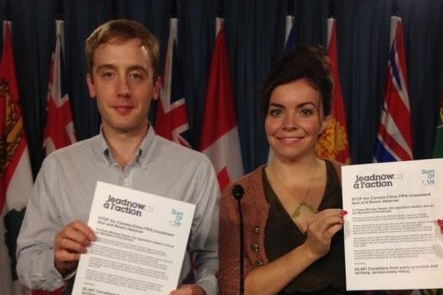 Two young Canadians delivered a petition with over 60,000 signatures to Ottawa this morning.  The petition was signed by Canadians who oppose a Canada-China investment treaty and a major takeover bid by a Chinese state-owned company of a Canadian energy firm.

The Canada-China Foreign Investment Promotion and Protection Act (FIPPA) is slated to be ratified within the next two weeks, though the Ministry of International Trade did not confirm a specific date as of today.

"FIPPA has gone from obscurity to national prominence in just a couple of weeks," said Emma Pullman, a campaigner with SumOfUs. SumOfUs is an advocacy group for sustainable business.

Canadians of all ages across Canada signed the petition, Pullman said. She recounted an email from a 78-year-old man who lived in Canada his whole life.

He wrote: "I feel like we have a Prime Minister who is undermining the Canada that I've always loved."

Pullman presented the petition with Leadnow.ca's Matthew Carroll. Both were participants and organizers at PowerShift, a major youth-led conference in Ottawa focused on climate and environmental justice that finished on Monday.

"We felt honoured to be able to bring a message from 60,000 plus Canadians to Parliament Hill. We called on Prime Minister Harper to stop the secretive and extreme Canada-China FIPA investor deal. We want him to start over with a national process to make a democratic decision about the future of our economy, energy and environment," Carroll told The Vancouver Observer. LeadNow is an advocacy organization whose stated aim is "the fair, responsible and democratic Canada."

The petition also targets the $15 billion takeover bid of Calgary-based Nexen Inc. by the Chinese National Offshore Oil Corporation (CNOOC). Industry Minister Christian Paradis will determine the fate of whether the largest Chinese state-owned enterprise takeover of a Canadian natural resource firm in history will go ahead.

"The $15 billion-dollar Nexen takeover will open the floodgates to a wave of foreign buyouts of Canada's natural resources," the petition claims.

"I think this whole thing is a travesty of democracy"

The petition was presented just days before the majority Conservative federal government is slated to approve a controversial Canada-China foreign investment treaty which would give Chinese investors equal treatment as domestic investors, and allow Chinese investors to sue the Canadian government in extra-governmental tribunals. Opposition Green Party MP Elizabeth May sharply criticized the Conservatives' handling of the treaty's creation and ratification process.

"The Canada-China FIPA was not made public to anyone until September 26, when it was tabled in the House of Commons as quietly as humanly possible," May told The Vancouver Observer following the press conference presenting the petition. May said that the Conservatives tabled the treaty "as quietly as possible under parliamentary procedure."

"I'd been asking for it for days and looking for it. I was paying attention and I grabbed it and started reading it.

"I think this whole thing is a travesty of democracy. I can't tell you how angry I am."

May spoke at a press conference in Ottawa this morning to present a petition with over 60,000 signatures from Canadians opposed to the Canada-China Foreign Investment Promotion and Protection Act (FIPPA).

A Ministry of International Trade spokesman maintained that the federal government has introduced an "unprecedented approach to bringing international treaties to the scrutiny of the House of Commons."

"Contrary to their rhetoric, the Opposition had four opportunities so far to debate this treaty in Parliament. Each time they've chosen not to," he wrote.

He also maintained that the Canada-China investment agreement is "similar to the 24 other investment treaties Canada has signed with key trade and investment partners."

"We join countries such as New Zealand, Germany, the Netherlands, Belgium and Japan, who have all signed investment treaties with China on terms that are similar to or in most cases less favourable than the terms we have negotiated with China," he wrote.

But opposition MPs, international treaty experts and Canadian citizens have expressed increasing alarm at the potential implications of signing a major investment agreement with China, which has billions of dollars in natural resource investments.

Belgium is currently facing a $2 billion arbitration claim from China under a foreign investment protection treaty clause. The claim is filed by China’s second-largest insurer, Ping An Insurance Group, against the Belgian government over the expropriation of a Belgian-Dutch bank.

The Canada-China FIPPA will be ratified after an Order in Council, which, according to the Government of Canada, is a "royal prerogative" requiring the Governor General's signing off on the treaty.

The Ministry of International Trade spokesman did not confirm a specific date the Canada-China FIPPA will be ratified.

How LeadNow plans to fight the "stunning erosion of Canada's democracy"