BC woman running equivalent of 29 marathons to stop Enbridge pipeline

Thirty-two-year-old Kim Slater will run the equivalent of 29 marathons across northern BC this summer as a low carbon way of connecting with communities along Enbridge's pipeline route. She'll be sharing her journey and discussions with people along the way through film and social media in the hopes of sparking a national dialogue on alternatives to oil sands expansion and how Canada can create a sustainable clean energy strategy. 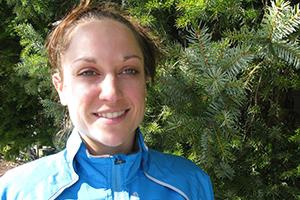 Kim Slater hopped in her Delica vehicle sputtering vegetable oil and drove towards the Alberta border. The next morning, she put on her running shoes, breathed in the mountain air and hit the ground one foot at a time to begin a 50 day run across the province.

Making her way through the tumbling mountain scenery of the Rockies, Kim Slater passed Mount Robson, the highest peak in the Canadian Rockies. Under a blazing summer sun, she  powered through the third day of her run along the length of the proposed Enbridge pipelines through Northern BC.

“When I have kids, I need to be able to tell them I did everything in my power to keep their future safe," the Whistler, BC resident told the Vancouver Observer.

Set to cover 1,170 km in 45 to 50 days (the equivalent of 29 marathons),  the run will allow her to engage with BC communities about Canada’s energy future, she said.  She will also talk with people she meets about alternatives to expanding the oil sands.

“An energy policy routed in the principles of sustainable development is needed before the tar sands and pipeline infrastructure is further developed, and we should all have a say in it,” she wrote in an IndieGoGo campaign in which she raised $15,000.

The money helped cover the cost of food for the journey and a vehicle that runs on waste veggie oil and sports a solar panel roof, she said.

With a support driver, Slater plans to follow Highway 16 to Kitimat.

The red line shows Enbridge's proposed route for the Northern Gateway pipelines. The purple line is the route Slater will be running. Both are roughly the same distance in km. Photo credit: From Band Together BC website.

Enbridge pipeline: "Our clean air, land, ocean and climate are at stake"

The epiphany that led to her campaign, Band Together BC, came while she was upside down in a head stand while teaching yoga.

“It was a message from my heart shooting into my head!” she wrote.

Slater’s campaign is motivated by what she says is a “deep concern” over the pace and scale of oil sands expansion and the potential risks with associated projects, such as Enbridge’s proposed Northern Gateway pipelines.

Enbridge wants to build two adjacent pipelines across northern BC. One would carry 193,000-barrels of condensate from BC to Alberta and the other would carry 525,000 barrels of oil sands crude from Alberta to tankers on the coast.

Our clean air, land, ocean and climate are at stake, says Slater, whose concern over the impacts of climate change and the lack of a national energy strategy to decrease our dependence on fossil fuel has compelled her to hit the road one foot at a time.

Running is a low carbon way of covering the distance, Slater said.

“It embodies the principles of utilizing alternatives to fossil fuels.”

She plans to capture her conversations and interactions with people along the way through film, photos and social media. She hopes her campaign will spark a national dialogue about Canada’s energy path and “contribute to the creation of a national clean energy strategy.”

Along the way she will be asking people:

"How do you feel about the way we are producing energy today and how comfortable are you with the level of impacts associated with current practices related to the tar sands?"

"Looking ahead to the year 2050, what does an economy and society based on clean renewable energy look like? What does that mean for your community?"

Slater, who grew up on a horse farm in Guelph, Ont., and completed a masters in international relations at the University of Toronto, first ventured to BC as a tree planter and later moved to Nelson in 2006 before settling in Whistler in 2008.

When she’s not training for marathons or teaching yoga she works as an executive director of a non-profit – The Sea to Sky Clean Air Society.

A vegetarian for nearly 20 years, she ran her first marathon only a month ago on June 10, from Tofino to Ucluelet for Edge to Edge.

When she’s running, Slater says she thinks a lot about the world we live in and about “these scary times that also offer brilliant flashes of hope.”

“I often wonder how I can best be of service, what I can do to protect what I value and love - strong communities, democracy and justice for all, healthy people and ecosystems, clean air and water, trees, the kids I’ll hopefully have one day- all life really.”

Other times, she says, she finds running meditative.

"I run outside so that I can feel that connection with the natural world," she said. "The rhythm of my feet on the ground, the sensation of air filling my lungs-- running makes me feel more alive and connected."