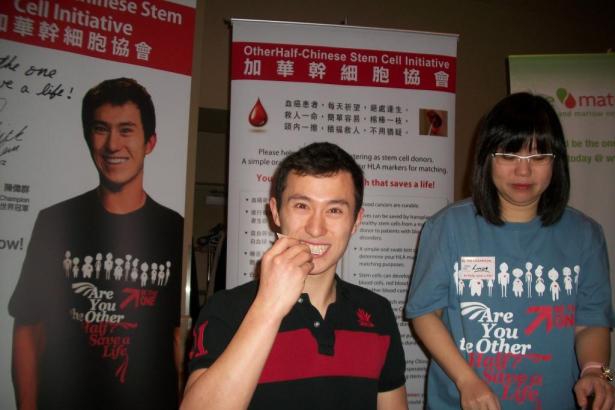 Champion figure skater Patrick Chan spoke about his ambitious goals about the upcoming 2014 Sochi Winter Games at the Floata restaurant in Chinatown on Friday.

He was joined by members of the World Chinese Business Association of Canada (WCBAC) and volunteers from the Other Half, a Chinese stem cell initiative, who will be holding a fundraiser to to support Chan's training for the Olympics.

“We are very excited to have Patrick here today, and we hope to not only match, but to exceed funds raised last year for him,” said Richard Wong, chair of the Chinese Business Association of Canada and one of the main organizers for Chan’s fundraiser tomorrow.

Chan is one of Canada's best contenders for a medal in men's figure skating: he is a two-time winner of the continental championship, 2011 CBC Athlete of the year, and a five time Canadian champion. After a disappointing fifth-place finish in the Vancouver Winter Games in 2010, Chan said he remains optimistic, yet cautious on the road leading up to Sochi.

“Vancouver was a bit disappointing I made the mistake of rushing into it, but I am taking it a day a time right now,” he said. “All my focus is on defending my title at the figure skating championships in Nice this spring.”

Along with his success on the world stage, Chan is also the first person to register for the Other Half, which seeks to increase the number of Chinese donors in the stem cell registry worldwide. Chan is well known for his community work, having devoted many hours to the Ronald MacDonald House Charities and other non-profit organizations.

“There is no point in being a prominent figure and not using it to make change,” he commented. "I owe so much to my community and by working with the Other Half, I feel like I am giving back."

Buy one month get another month free at Budding Children's Garden and Daycare.