Will hockey be back on November 2? NHLPA's time to decide is now. 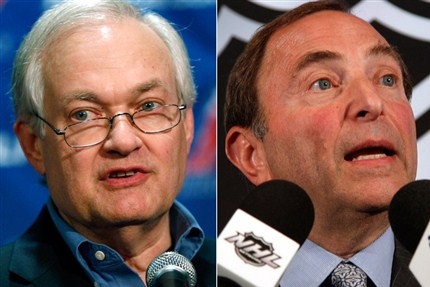 Photo Courtesy of: The Canadian Press

Tuesday morning saw the NHL and the NHL Players Association (NHLPA) come back to the negotiating table to renew their Collective Bargaining Agreement (CBA) to save the league from another lost year of hockey.

Reports from various sources with Sportsnet and TSN indicate that the NHL owners have offered a deal where they would split 50/50 “Hockey Related Revenue (HRR)” for the potential CBA. This is the first deal offered by either side since September 12.

@Real_ESPNLeBrun revealed today that the deal provided that the 2012-2013 season would remain at the traditional 82-game schedule starting in November 2, with one additional game to be added each month for each teams schedule to account for those missed during October.

2)   Entry-level contracts would be at 4 years in length

The next step in this process is for the NHLPA to determine. Executive Director Eric Fehr responded mostly positively. Responding to TSN when asked if he felt that the offer was an improvement over those tabled prior, "In some respects I think it is in other respects I'm not sure. We have to look at it."

Fehr announced soon after that the NHLPA would meet at 5PM EST on Tuesday to consider the proposal at hand.

While a 50/50 deal is common in other leagues like the NBA and NFL, this deal for the players means that they suffer a 12% decrease in their salary, from the previous 57% of the HRR they held in the old CBA.

For the NHLPA to refuse, however, would be a PR disaster, and their leverage for future negotiations would be likely damaged – in the future they may not see such a 50/50 split be offered to them, so the time to strike a deal is now.