Canada and the environment: key events from 2011

From Greens in Parliament to tar sands opposition and the Kyoto Protocol, here's a summary of some of the year's most important environmental issues and events. 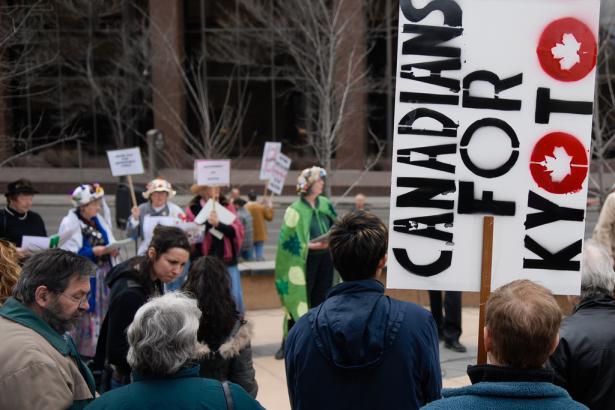 The past two months have seen a whirlwind of activity in Canadian environmental policy. To get a sense of where we stand – and where we’re headed in 2012 – the Vancouver Observer has put together a year-end wrap-up of some of the most significant environmental issues and events of 2011.

In 2010, author Ezra Levant coined the term “ethical oil” with his book in support of Canada’s tar sands industry. And though the book was released last year, the argument – over whether Canadian oil sands are more “ethical” than alternatives from conflicted countries like Venezuela or Saudi Arabia – continued throughout 2011.

According to Levant, Canada’s record on human rights, equality and environmental responsibility should be considered against the abuses of governments in other oil-producing nations in the Middle East or South America. He says instead of the typical conservative approach in support of big oil, he makes the case for the tar sands “from a liberal point of view”.

In March 2011, the Ethical Oil Institute was launched as a registered nonprofit corporation with the province of Alberta. Soon after, the organization produced a television ad that ran on the Oprah Winfrey Network and SUN TV and sparked heated remarks from the Saudi embassy.

As expected, the “ethical oil” argument has been tossed around and critiqued by many in the environmental community. Even the oil industry was said to be wary of the slogan.

Greenpeace climate and energy co-director Tzeporah Berman said she was “paralyzed with shock” at the campaign and advertisement, urging oil sands supporters to stop “polluting our children’s minds”.

Now, the Ethical Oil team is promoting an ongoing Chiquita boycott, after the banana producer encouraged suppliers to find cleaner alternatives to tar sands fuel. The message: You boycott us? We'll boycott you back.

For months, the European Union has been deliberating over an initiative to classify different types of fuel by related greenhouse gas emissions. Under EU climate change commissioner, Connie Hedegaard, the European commission put their stamp on the European Fuel Quality Directive, which sets minimum environmental standards for oil companies and industries like the tar sands.

Media reports on the fuel directive soon turned to Canadian tar sands products, which could be restricted or even banned in the EU due to their high carbon footprint. Such a ban may not seem overly serious given that the EU’s oil imports from Canada are already minimal, but Europe’s prominence in the international community means a decision like this could have an impact on other markets.

Industry lobbyists, politicians and even oil sands supporters from the UK have been aggressive in their response, speaking out against the directive in an attempt to prevent the tar sands from being officially classified as a high-carbon, “dirty” fuel.