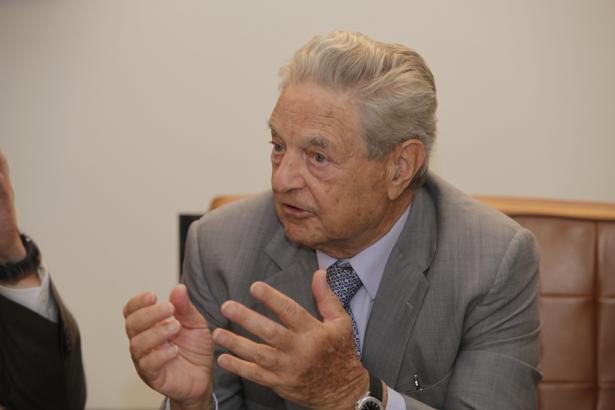 Since the Minister denounced “radical” environmentalists in an open letter blaming foreign funders for hijacking Northern Gateway regulatory hearings, heated responses have been pouring out from nonprofits and liberal politicians across the country.

Oliver appeared on CBC’s The National on January 9, listing American philanthropist George Soros as one of the “billionaire socialists” funding the environmental groups’ “radical ideological agenda”.

“They have an agenda, and it seems to be ideologically driven. And it’s financed, without exaggeration, by billionaire socialists from the United States – people like George Soros,” said Oliver in one CBC interview.

But Soros’ philanthropic organization, Open Society Foundations, says they have no part in the Northern Gateway debate.

When the Vancouver Observer reached Open Society to ask about their involvement, Weil said the organization was unaware of Oliver’s recent claims. According to Weil, their closest link to the pipeline debate is their support for groups working to achieve financial transparency in the oil industry.

“We do support some non-profit organizations working in Canada including Publish What You Pay, a global civil society coalition that campaigns for transparency in the payment, receipt and management of revenues from the oil, gas and mining industries,” said Weil.

She said, however, that the organization's goal is related to fiscal transparency in the extractive sector—not to environmental issues.

Despite his original claim that he didn’t want to “name names”, the Resources Minister did mention another significant funding group: the US-based Tides Foundation.

Tides Canada, operated as a separate (and fully Canadian) organization, responded to Oliver’s criticisms. In a release, Tides Canada CEO Ross McMillan noted the importance of maintaining an “open and democratic discussion” during the ongoing Joint Review Panel hearings. McMillan’s concerns are echoed by opposition MPs like Joyce Murray, who said the Conservative government’s interference in the hearings is “unacceptable”.

“These are critical issues with long-term implications for Canada. We live in a democracy where all voices should be heard. It is totally appropriate for Tides Canada to support Canadian engagement in our public process,” she said.