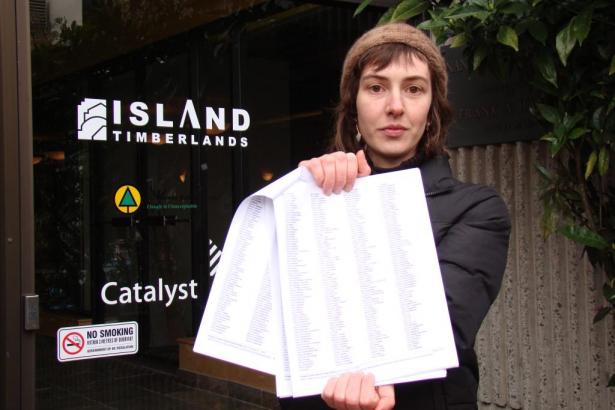 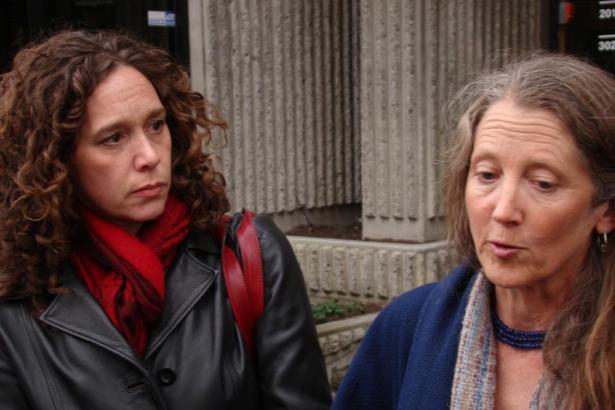 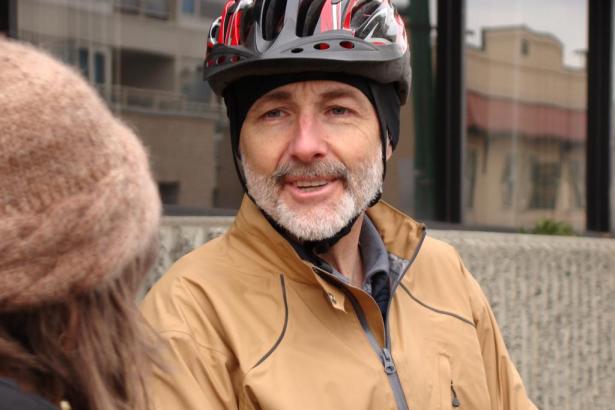 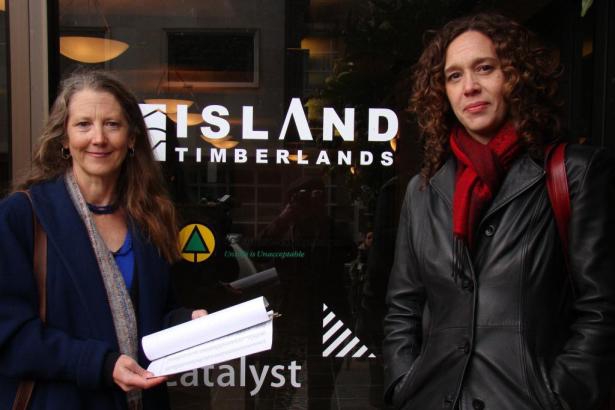 Photos by Daniel J. Pierce 1) Cortes advocate Zoe Miles with the petition 2) Tzeporah Berman and Carrie Saxifrage speak after meeting with IT 3) Nanaimo petition signatory Ian Gartshore 4) Saxifrage and Berman outside IT offices

A group of forest advocates visited Island Timberlands CEO Darshan Sihota in Nanaimo on Thursday, delivering a petition bearing over 6,200 signatures to stop industrial logging on B.C.’s pristine Cortes Island. After a 15-minute appointment turned into an hour-long meeting, participants agreed to meet again to further discuss the company’s plans.

“We have committed to a further meeting with a select set of Cortes community members within the next few weeks, to share our harvest plan ideas,” said Morgan Kennah, Manager of Community Affairs at Island Timberlands.

The company, a subsidiary of the international firm Brookfield Asset Management (BAM), announced weeks ago that logging operations were set to begin in January. The land in question is privately owned by Island Timberlands (IT), but Cortes residents have grave concerns as the area encompasses some of the island’s most sensitive ecosystems and a significant portion of precious old growth forest.

“We’re not anti-logging, but we are against industrial scale logging on Cortes Island,” Carrie Saxifrage, a long-time member of the Cortes community who initiated the petition, said. In addition to opposing industrial methods, community members asked IT to retain remnants of old growth forest, protect watersheds and salmon habitats, and respect the BC Sensitive Ecosystem Inventory.

Copies of the petition were delivered in a coordinated effort on Thursday to affiliated BAM offices in seven different cities, including London, New York, Hong Kong, Sydney and Toronto.

“We’re here to hopefully bring home more to Island Timberlands how significant Cortes Island is to people, and to reiterate our history as a community working long and hard for ecosystem-based forestry,” Saxifrage explained.

Saxifrage arranged a meeting with Sihota and Forestry Director Bill Waugh at IT’s corporate office in Nanaimo, to hand deliver the petition and discuss alternatives. Leaving the office, she said she was “cautiously optimistic” about the result.

“They seemed honestly open to creating alternatives if they were able to address the needs of their company,” she said.

“Cortes Island and its allies are prepared to oppose the logging in many different ways and on many different levels. But we are equally prepared to go forward with a permanent solution that is best practice, and that meets everybody’s interests to the fullest extent possible.”

Cortes homeowner Tzeporah Berman joined Saxifrage to attend the meeting. Berman and her family spent seven years living on the island, and like many others who have spent time there she feels a genuine sense of attachment to the unique and remote community.

“Cortes Island has touched the hearts of people all over the world who are concerned about this proposed logging,” said Berman.

Since the end of December, the fight to save Cortes’ forests has gained support from environmentalists around the world. The issue also got a big push from supporters of Occupy Wall Street, since Brookfield Asset Management is the very same company that owns Zuccotti Park, where Occupy protesters in Manhattan originally camped out.

“When Carrie and her husband Barry created this petition, we talked about how it would be great if we could get a couple hundred people to sign it. And then wouldn’t it be great if we had over 1,000 people?” Berman recalled.

To their surprise, 500 people signed on within the first 48 hours. Now the petition has exceeded all expectations – reaching over 6,200 signatures with more being added by the hour.

Nanaimo resident Ian Gartshore heard about Saxifrage’s meeting with IT and rode his bike down to the offices to sign the petition in person.

“We have logged almost 90 per cent of the old growth forest on the West Coast. And if we cannot manage our forests sustainably, how can we possibly expect to keep on going?” he said.

Island Timberlands had previously notified Cortes residents that road upgrading would begin in “mid-January” to prepare for logging operations. However, Saxifrage indicated after the meeting that IT management may not begin logging for some time.

“They still have plans to clear a roadway in Squirrel Cove sometime in the next three months,” she noted.

According to IT’s Morgan Kennah, specific plans and schedules for harvesting are dependent on market influences, environmental concerns and logistics. And after today’s meeting, it appears their schedule will also include additional discussion with the community.