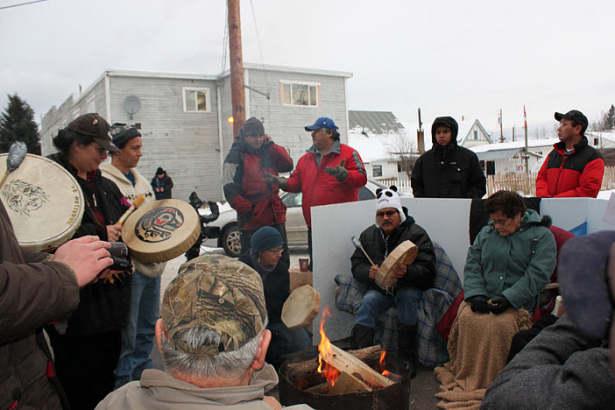 Gitxsan community members form a blockade outside the Treaty Office in December (still ongoing). Photo courtesy of Gitxsan Against Enbridge

A news release put out by the Gitxsan Chiefs’ Office says members of the Gitxsan First Nation have resolved issues and agreed to pull out of a controversial deal with Enbridge over the Northern Gateway pipeline. Representatives also reported agreement among chiefs about how to proceed with the struggling Gitxsan Treaty Society (GTS), but one hereditary chief says this agreement wasn’t totally inclusive.

According to the press release, members from 51 Gitxsan houses showed up to discuss the issues at meetings held earlier this week by the Chiefs’ Office. But hereditary chief Norman Stephens says not all Gitxsan chiefs were invited to take part.

“I wasn’t invited to that meeting. They knew better than to invite me because I have pointed out their errors,” he said.

Stephens was among a number of other Gitxsan who opposed the Treaty Society’s decision to engage in an agreement with Enbridge. After the deal was announced, negotiators were fired and the opposition formed a blockade outside the GTS office in Hazelton, B.C.

After votes conducted during this week’s meetings, the office claims to have reached consensus on two important next steps: passing a resolution to “strengthen the GTS” and officially withdrawing from the Enbridge agreement.

“Initially when the Enbridge deal broke,” recalls Stephens, “we already thought then that the deal was dead and we wouldn’t abide by it. It was a no.”

“But the other resolution to try and strengthen the Treaty Society, that’s nonsense.”

Stephens said the “resolution” reported by the office means nothing since the GTS has no members and is currently not a legal society. The group is involved in ongoing legal proceedings to be reinstated, after being sued by Gitxsan chiefs who oppose the Society’s right to negotiate on their behalf.

Stephens also claimed recent voting relied on chiefs who were paid to take part in the meetings.

“The Gitxsan Treaty Society, in court, compared the chiefs to people in the line at the soup kitchen,” he said.

“Now they have called a meeting and they called their chiefs, which really amount to nothing more than soup kitchen chiefs. Because they lined up, and they waited until they got their cheques, and then they voted.”

GTS negotiator Beverley Clifton Percival was quoted in this week’s release, assuring the public that the Gitxsan are prepared to move forward.

"We will right our canoe and move forward in a respectful way according to Gitxsan Ayookw," she said.

While Percival reported unanimous support for an end to the blockade and reopen the office, Stephens said the protest action is still ongoing despite an injunction.

“The blockade at the building is still on,” he said.

“The police have been told not to enforce any injunction. It’s just been adjourned to the judge in Smithers.”

Stephens sees this latest statement from the GTS as “premature”, and believes the group is simply trying to promote themselves and recover from the past few months’ controversy.

“They’re trying to prop themselves back up, because they’ve been cut off from Treaty funding by Canada and B.C. and the B.C. Treaty Commission,” he said.

“They’re trying to keep their paycheques going, is literally what it comes down to.”