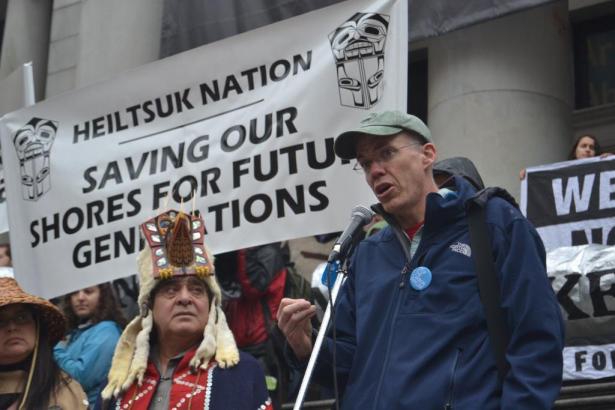 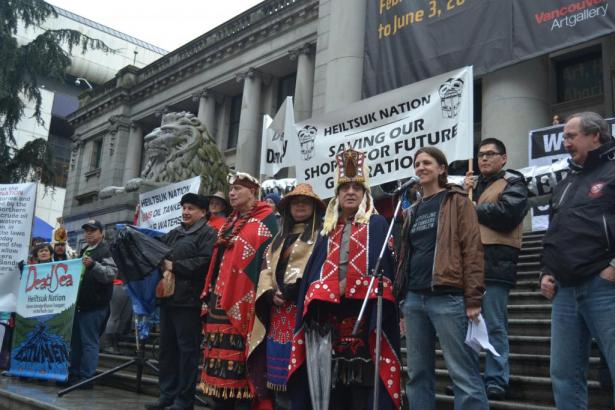 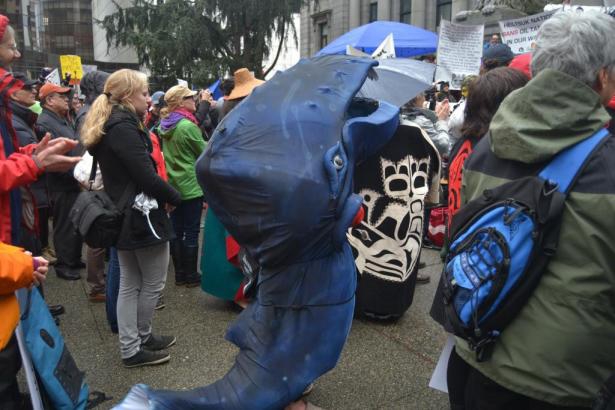 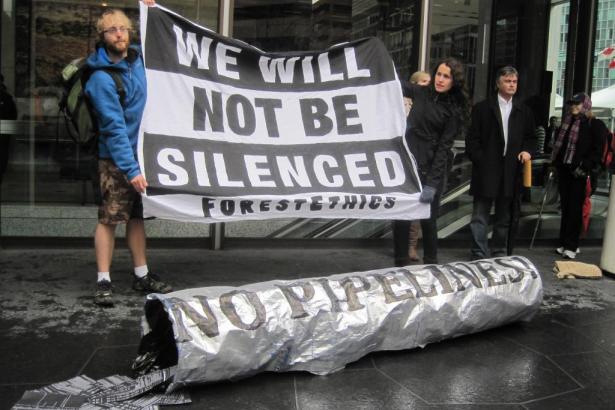 “We say no to Enbridge oil,” was the resounding message heard across downtown Vancouver Monday afternoon, as more than 2,000 people gathered in the rain for a rally opposing the Enbridge Northern Gateway pipeline.

In full ceremonial regalia, members of the First Nations marched through Vancouver's business section, beating drums. Out the windows of Canada's largest natural resource extraction companies, employees looked down at them. And behind them, a procession of mostly well-dressed mostly twenty-somethings followed, chanting anti-pipeline slogans. 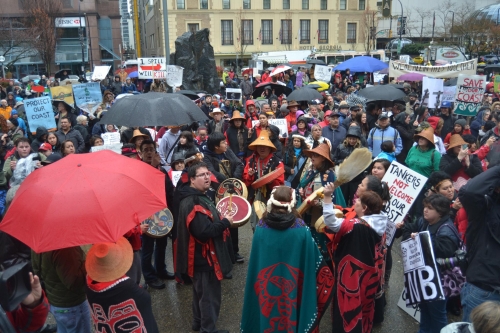 Led by Aboriginal leaders and the environmental group ForestEthics, the peaceful protest at the Vancouver Art Gallery attracted a large, enthusiastic crowd reminiscent of Occupy Vancouver. They came to hear heartfelt addresses from environmentalists and speakers like 350.org founder Bill McKibben, who joined chiefs from coastal BC First Nations in thanking supporters for their dedication to the cause.

He emphasized the key role of oil sands projects like the Northern Gateway pipeline in perpetuating what he sees as a deadly, carbon-based economy.

“What they want is for British Columbia to be a kind of carbon portal, a kind of carbon gateway for oil and coal....and we just can’t let that happen. That oil has got to stay in the ground,” said McKibben, earning a raucous round of applause from the audience.

As the driving force behind 350.org, McKibben has been instrumental in the American fight against the Keystone XL oil pipeline. He warned protesters not to bend to aggressive political tactics, assuring them that their actions are not going unacknowledged by the rest of the world.

“Do not ever let them tell you that you are an extremist,” he said, referring to the Canadian government's recent attacks on environmentalists.

“I was a little worried coming up here, because I’d read what your foreign minister said about ‘foreign extremists’. I guess he meant me.”

One self-proclaimed “extremist” in the crowd, Vancouverite Vanessa Murnaghan, said she was at the rally because she felt it was her duty as a Canadian to stand up for the coast.

“There’s a very strong, united front that is being formed to fight this thing,” she said.

Also speaking at the event was ForestEthics’ senior energy campaigner Nikki Skuce and SFU professor Dr. Marc Jaccard and Edwin Newman of the Heiltsuk First Nation. The crowd went wild for a musical performance from 11-year-old Ta’Kaiya Blaney, whose emotional song, “Shallow Waters”, gave voice to common fears about oil tankers on the BC coast.

Organizers said they were very pleased with the impressive turnout for the oil sands pipeline protest, particularly given the poor weather and awkward timing of a Monday afternoon.

“It really shows that people in Vancouver are willing to come out in the rain, in the middle of the day, to express that they are not willing to sit back and allow the federal government to push dirty oil through to our coast,” said Valerie Langer, co-founder and director of BC forest campaigns at ForestEthics.

“This is not just a rural issue for people up in the Great Bear Rainforest—though certainly it’s very important there—but it’s a very keen issue for anybody who loves this province.” 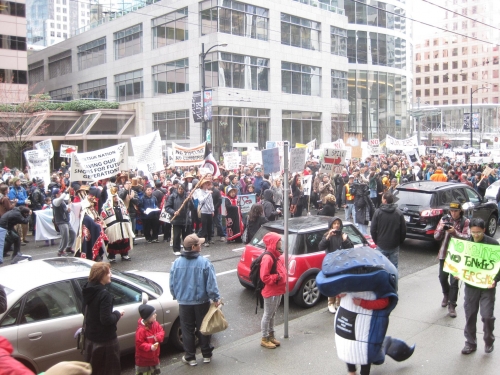 After the speakers had finished at the Art Gallery, First Nations in regalia led the crowd in a march to Enbridge Northern Gateway offices at 505 Burrard Street. There, the chants turned to deafening cheers, leaving businesspeople trapped inside the lobby unsure of what was going on. 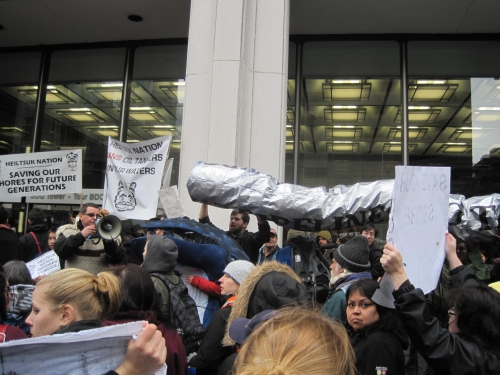 The demonstration ended peacefully after about two hours, as had been arranged with Vancouver Police.