The Yinka Dene Alliance departs on Monday for a nationwide journey on the Freedom Train, to storm Enbridge's AGM in opposition to the Northern Gateway pipeline. 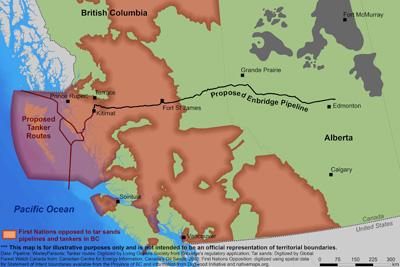 The Alliance, a leading group of First Nations that has been active so far in opposing the Enbridge Northern Gateway pipeline and tanker route, says the trip is an important step in protecting their rights, their land and their water from the threat of an oil spill.

The Freedom Train is set to depart on Monday from Jasper, Alberta, and will be stopping in several cities before arriving in Toronto for Enbridge's annual shareholders meeting on May 9.

“We’re travelling across Canada to tell Enbridge that they will not be permitted to build their pipelines through our lands, period,” said Chief Jackie Thomas of the Saik’uz First Nation, in a news release.

“The fight against Enbridge is a fight for our freedom to govern ourselves and to choose our own future. We will not accept the government imposing a decision on us and forcing this pipeline through our lands,” she stated.

At each stop along the way, the train will be met with support from other First Nations groups across the country. Rallies, feasts and events are planned in Edmonton, Saskatoon and Winnipeg, and representatives will be picked up to join the group in each city. Up to 40 people representing at least ten different Nations will be on board the train, including youth and elders.

Chief Martin Louie of the Nadleh Whut’en First Nation, a member of the Yinka Dene Alliance, said the journey will build on the support from other Canadians to ensure the protection of traditional lands.

“We need a healthy environment to ensure a healthy future for our children,” he said.

The Yinka Dene Alliance is part of the same group responsible for the Save the Fraser Declaration, which includes signatories from over 100 First Nations officially banning proposed pipelines and tankers on their territories. Coastal First Nations have also signed a similar declaration, solidifying Aboriginal opposition across territories that cover the the majority of Enbridge's proposed route.

Though members of the Yinka Dene Alliance were present at Enbridge's last annual meeting in Calgary, this year's delegation is expected to be the largest yet. Leaders say they put out a call for solidarity, bringing First Nations allies out from the prairies and Ontario to join in support of the cause.

Tzeporah Berman, who recently left her post at Greenpeace International to head up an anti-oilsands coalition, said the Freedom Train also has the support of non-Aboriginal groups taking a stand against oil and gas development.

"Their whole message is really powerful. They're saying, 'We're a Nation, we have laws, and we're asking you to recognize them'," Berman told the Observer.

"We're just standing behind to support them," she said.