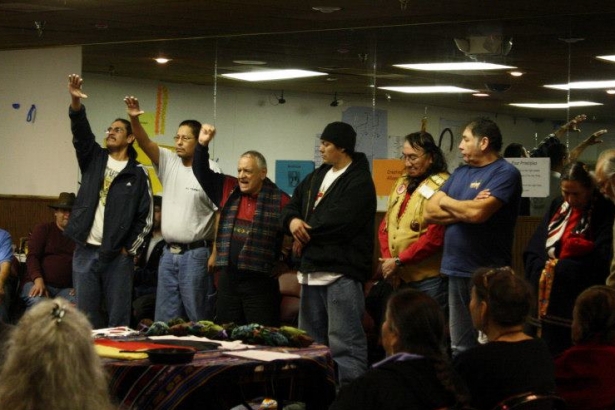 The latest in a series of legal documents opposing oil sands development has been drafted, signed and is about to start making its way across the country.

The International Treaty to Protect the Sacred From Tar Sands Project is the result of last week’s three-day conference in South Dakota that brought together nations from all over North America to commemorate the 150 anniversary of the peace treaty between the Pawnee and the Yankton Sioux nations.

The treaty is comprised of seven articles and outlines First Nations’ history of sovereign self-government and legal rights to traditional land, as well as the commitment between all the signatory nations to enforce and uphold their collective responsibility to protect their lands. It demands the governments of both the United States and Canada recognize those rights, citing the section 32 of the United Nations Declaration of the Rights of Indigenous People.

Hereditary chief of the Ihanktonwan First Nation Phil Lane Jr. said the treaty reinforces First Nations obligations to defend the environment based on ancient laws, now and into the future.

“This is part of a much larger global campaign called Protect the Sacred. The sacred is not limited to stopping tar sands projects. It’s a global Indigenous movement with allies around the world that are going to focus very specifically on issues that are negatively impacting Mother Earth and Indigenous peoples and humanity, all members of the human family.”

Lane said each sovereign nation determined who its representative would be and how many it would send based on their own traditional systems of governance. The Yankton Sioux sent council members, both elected and traditional chiefs, as well as leaders of extended families within the tribe and leaders of sacred societies.

Faith Spotted Eagle is a grandmother and founder of the Brave Heart Society, an organization dedicated to teaching traditional knowledge and culture to girls. When she signed the document, she became the first woman in the history of North American Indigenous treaties to do so. It’s a milestone, but Lane said the only reason women have not historically signed treaties is that, had those treaties been broken and resulted in violence, it would have been the men who had signed who would fight.

Many of the nations sent their representatives to the gathering to negotiate the treaty, then called them back to discuss proceedings with their people and decide whether to ratify the document. Ratification is an ongoing process as nations are added to the list, and on March 4th, signatories are invited to join the nations of the Yinka Dene Alliance in Ottawa to witness the addition of more names to the document.

Geraldine Thomas-Flurer, coordinator of the Yinka Dene Alliance, said inviting the signatories to Ottawa to be a part of growing the agreement and hopefully speak with politicians is part of broadening the movement.

She said this treaty is the next step toward stopping the Northern Gateway Pipeline as well as the long-term goal to protect the environment for Indigenous and non-Indigenous Canadians alike.

She also hopes to build awareness of the diverse needs and cultures of First Nations across North America.

“People have to understand that no First Nations are alike, no First Nations community issues are the same. There are issues that are very different and we respect that. It’s like saying one city is the same as another city in regard to what is needed.”

The gathering is in its early stages right now, Thomas-Flurer said, but plans include ceremony and discussions.

Jessica Clogg, executive director and senior counsel at West Coast Environmental Law, said the treaty is a reflection of the American and Canadian governments’ historical recognition of First Nations sovereignty.

“The premise behind an Indigenous law instrument like this is that each First Nation, each tribe, has ancient laws that continue to have effects today and to have authority and jurisdiction over the land and water of their territory.”

She said such a document can be enforced several ways. The first is through Indigenous law itself.

“First Nations have defended their territory through legal, diplomatic and actually military means. I think nations will, lawfully of course, be considering enforcement through their own laws.”

It can also be enforced through Canadian and international law, via the Crown’s obligation to obtain free, prior and informed consent before developing land. First Nations can launch court challenges to demand recognition of land rights, and the Crown has a duty to those peoples in the interim while the legal decision is being made.

This treaty, Clogg said, in addition to others such as the Save the Fraser Declaration and the Coastal First Nations Declaration, expose any government or company that pushes through any tar sands project to legal consequences should the courts approve Indigenous rights and title.

“These instruments give a pretty clear signal of what could happen, the perspective that these nations would have once title is approved.”

Despite enviro record, Enbridge and Teck get sustainability recognition