Kinder Morgan: Vancouver’s fate in the rush for black gold

Starting in September 2012, Texas-based pipeline giant Kinder Morgan will begin public consultations for an estimated $4 billion expansion of its Trans Mountain pipeline from Alberta’s oil sands in Edmonton to Metro Vancouver. The company plans to more than double the capacity of the pipeline by 2017. The project rivals Enbridge’s Northern Gateway pipeline, which aims to export oil sands crude through the Great Bear Rainforest. With the benefit of an existing right-of-way, could Kinder Morgan succeed in making Vancouver the first major artery of oil sands expansion on the West Coast? Or will the company's record of oil spills tar up its plans?

This is the conclusion of a five part series, Southern Gateway: An American pipeline giant's plans for Vancouver. 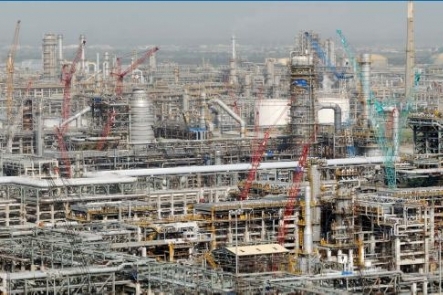 The Jamnagar refinery in northwestern India is one of the largest in the world, with the capacity to refine 1.2 million barrels of oil per day. Photo credit: FT.com.

On a Saturday morning in November, NDP MP Kennedy Stewart from Burnaby sat in the lobby of the Westin Bayshore, a hotel along the shore that overlooks Stanley Park and the Vancouver harbour, and discussed the pressure on Vancouver to become a leading oil shipper.

In India, he said, there is a new refinery with a capacity for 1.2 million barrels of oil a day, while China has similar formidable processing plants in the works.

“They are building refineries that dwarf our refineries,” Stewart said. “That’s really the demand that’s growing in China and in India. This oil has to come from somewhere.”

As energy reserves dwindle, global energy demand grows at an average of 1.7 per cent per year.

The subsequent rising price of oil has made the development of the oil sands economically feasible, as the extravagant costs of mining, extracting and refining the buried bitumen lay hidden.

The oil sands industry makes up two per cent of Canadian GDP and is expected to grow to three per cent by 2020, making the political pressure for expansion great.

Stewart wonders if there is enough commercial interest whether Kinder Morgan will ask the federal regulator, the National Energy Board [NEB], for more than 750,000 barrels a day.

“Why would you build a [$4 billion dollar] pipeline if it’s just going to get full in 5 years?” Stewart asked rhetorically, adding that there’s no reason that Kinder Morgan could not ask for a million barrels of oil per day or more.

In February, 2012 Kinder Morgan found out that the company has the financial certainty to move forward with a massive expansion of the Trans Mountain pipeline. Originally Kinder Morgan’s plans were to increase the pipeline’s capacity to 700,000 barrels of oil per day.

The company stated it would begin public consultation on the expansion plans in September, and would apply to the National Energy Board for permission to expand in 2013. They hoped to complete their expansion by 2017, company spokespeople said.

If the expansion goes through, up to 300 tankers will be traversing through Vancouver's port each year, a thirteen-fold increase in tankers since the company purchased the pipeline in 2005.

Robyn Allan, an economist and the former CEO of ICBC, suspects that the number of tankers that would end up in the Burrard Inlet as a result of Kinder Morgan's pipeline expansion would be a lot higher than what the company is willing to talk about now.

In a report she wrote in May, she stated that Kinder Morgan’s expansion would be larger than anyone anticipates, with the company's ability to expand incrementally by increasing pump stations.