Starting in September 2012, Texas-based pipeline giant Kinder Morgan will begin public consultations for an estimated $4 billion expansion of its Trans Mountain pipeline from Alberta’s oil sands in Edmonton to through Metro Vancouver. Their plan is to more than double the capacity of the pipeline by 2017. The project rivals Enbridge’s Northern Gateway pipeline, which aims to export crude oil from Alberta tar sands through the Great Bear Rainforest. With the benefit of an existing right-of-way, could Kinder Morgan succeed in making Vancouver the first major artery of oil sands expansion on the West Coast? Or will their record of oil spills tar up their plans?

This is the second of a five part series, Southern Gateway: An American pipeline giant's plans for Vancouver. 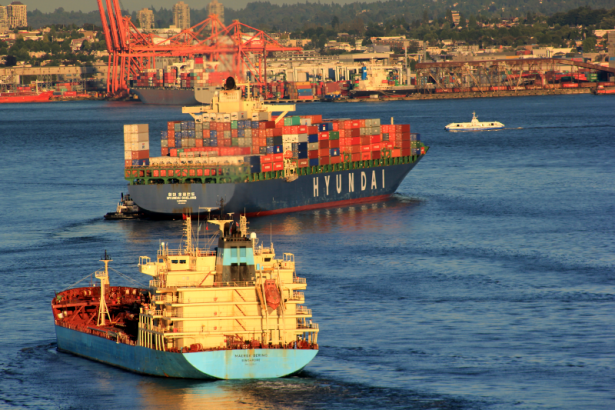 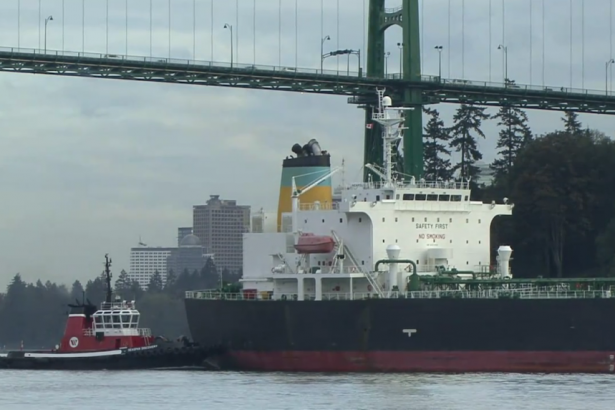 1. Tankers near the Vancouver harbour. Photos by Robin Grant for the Vancouver Observer copyright 2012. 2. An oil tanker goes under the Second Narrows bridge in Vancouver. Screenshot from No Tanks video on YouTube.

Oil tankers the size of skyscrapers carry diluted bitumen from Alberta's oil sands through the Vancouver harbour each week. If one grounded, as Shell’s ship did in Alaska on Saturday, the leaking bitumen would unleash a cloud of toxic fumes that could envelop the city and force people to flee as they did in Michigan two years ago during the first major oil sands spill.

Experts and federal regulators have been raising concerns about the lack of resources to deal with a major oil spill along Canada’s West Coast for years. Instead of heeding their warnings, the federal government has made emergency preparedness worse.

Stafford Reid, a marine risk expert and emergency planner with 20 years of experience, wrote a report in 2008 highlighting the fact that British Columbia was simply unprepared for a marine emergency.

“Nobody is essentially watching the store,” Reid wrote. “At least not the whole building.”

Reid estimated it would take a mere three or four full time staff to make up the amount of time that the government puts into emergency preparedness for a major oil spill.

“The lack of an effective mechanism to provide public oversight on emergency preparedness,” he wrote, is partly to blame.

Those concerns were raised even before budget cuts to Transport Canada’s panel of experts that makes recommendations on emergency planning (the Pacific Regional Advisory Council on Oil Spill Response), as well as recent cuts to Environment Canada and the Department of Fisheries and Oceans which have further weakened Canada’s emergency preparedness.

In 2010, the federal Auditor General released a 42-page report slamming Canada’s ability to handle a major oil spill. The federal government’s decision to shut down a regional environmental emergency response centre, set up to deal with coordinating oil spill cleanups, as well as the Kitsilano Coast Guard, have increased Vancouver’s risk of a small accident becoming a disaster.

Texas-based Kinder Morgan plans to more than double the capacity of the Trans Mountain pipeline, which runs from Edmonton to Burnaby and onto Bellingham, Washington. If successful, the expansion would increase capacity to 750,000 barrels of oil per day and result in up to 300 tankers visiting the Burrard Inlet each year to pick up oil sands crude for export. The jump in tankers would equal a thirteen-fold increase since the company purchased the pipeline and its Burnaby Westridge terminal in 2005.

The company states it will begin public consultations on their expansion plans in September and apply to the NEB in 2013.

Shallow waters in Vancouver present challenges and extra risks. Before journeying to the open sea, tankers transporting oil through Vancouver navigate through the shallow waters of Second Narrows, which ebb and flow through the heart of the city. The channel is only 120 metres wide (half the size of some tankers) and there’s as little as 1.35 metres between the bottom of the boats and the ocean floor. Tankers are only allowed to travel during daylight at high tides.