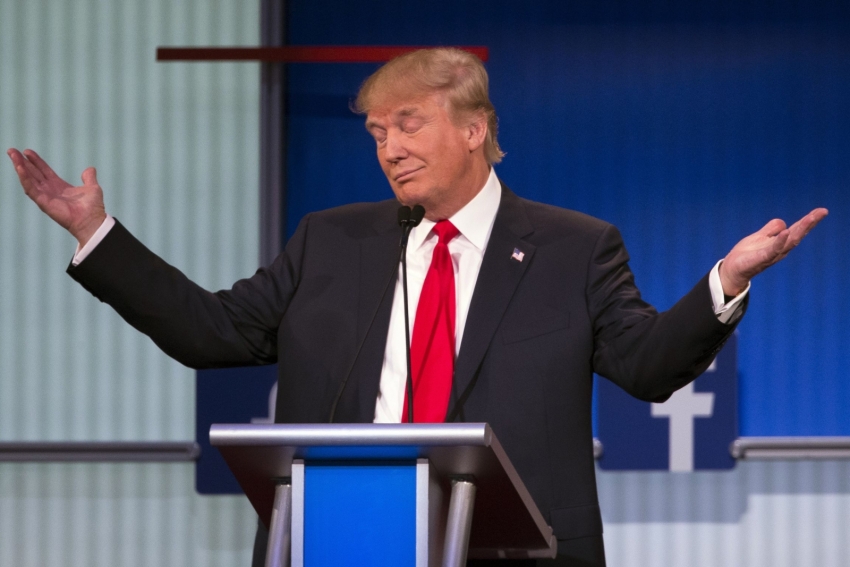 Donald Trump at the first Republican presidential debate on Aug. 6, 2015, in Cleveland, Ohio. Betting began to pick up as Trump's campaign gained momentum. File photo by the Associated Press.

Most Canadians can't vote in the U.S. presidential election, but it hasn't stopped many from using their cash to voice an opinion on who they think will win.

The B.C. Lottery Corp. is taking online novelty bets on the American election, and spokesman Doug Cheng says there has been rapid growth in wagers since presumptive Republican nominee Donald Trump's campaign began to gain momentum.

Cheng says the site has currently has the odds of Democrat Hillary Clinton winning the White House at about 2-5 and Trump's odds at slightly less than 2-1.

He says in B.C., 38 per cent of people placing bets have their money on Clinton becoming president, compared with 25 per cent for Trump.

But the BCLC site can also be used in Manitoba, and Cheng says the majority of people there have their money on the Republican candidate winning in November.

The corporation's odds makers are constantly tracking the presidential race, adjusting the odds with every policy announcement and gaffe.

There have been stark changes in Trump's odds, Cheng says.

"I think that shows how he shaved his odds and how he went from being the underdog to being a viable option, economics wise."

This isn't the first time BCLC has taken bets on U.S. politics. It started in 2014, and Cheng says they were the first jurisdiction in Canada to do so.

"This is a fun way for British Columbians to take part in the election, even though most of us can't vote in the U.S."

Canadians usually follow American presidential elections quite closely because the results can have an impact north of the border, Cheng added, but this race is a bit different.

"I think this election in particular is garnering even more attention because I think you have a person like Donald Trump who is such a dynamic and yet controversial candidate just dominating the headlines and I think you see that transferring over to our wagering."

See more
Award-winning author Richard Wagamese dies at age 61
B.C., Ottawa sign health agreement worth $1.4 billion, $65 million for overdoses
Speak up about this article on Facebook or Twitter. Do this by liking Vancouver Observer on Facebook or following us @Vanobserver on Twitter. We'd love to hear from you.