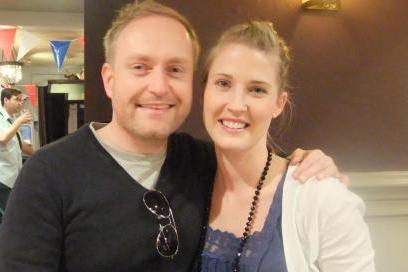 Photo of Patsy Dennis, from Barrie, Ontario, and her British fiancé Kris Rutland by Emily Barca

When the Queen sailed down the Thames in Sunday's Jubilee flotilla,  many Canadians joined the crowd, waving a Union Jack or maple leaf to mark the occasion.  But what does the Diamond Jubilee really mean to Canadians living in London?

Colin Robertson, a Canadian expatriate, and a teacher from Ottawa,  has been living in London for the past three years. Robertson recalls the queen's visits to Canada.

"My family used to go see her on Parliament Hill every couple of years," he said. The queen, he believes, is important to Canada.

"She helped bring the Charter of Rights and Freedoms to Canada and before her, Queen Victoria signed the BNA act which created our country," Robertson said.

At the Maple Leaf, a Canadian-themed pub in Convent Garden, Canadian expatriate Patsy was celebrating her birthday weekend and the queen's Jubilee with fiancé, Kris Rutland. Dennis described her family's connections to the queen. 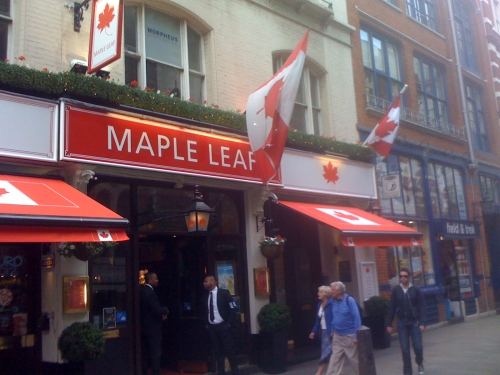 "She represents everything about my grandparents' British heritage," Dennis said.

Dennis explained that her grandmother even served the queen when she was a princess at Derry and Toms, a London Department store which closed in 1971. The building still stands and is home to the Kensington Roof Gardens, the largest roof top gardens in Europe.

"My nan wasn't nervous or shaking at all. She couldn't look or talk to the queen, but she did curtsy to her." It was a different time, explained Dennis, and you didn't speak unless you were spoken to. "Now, it would be different."

For Dennis, seeing the queen on her Diamond Jubilee is a "big thing" because of her grandmother's encounter with her.

Not all Canadian expats were so enthusiastic about the celebrations. Danica Kwong, who moved to the UK to study at the London School of hygiene and tropical medicine and has stayed for work, expressed indifference towards the Jubilee.

"Like most Canadians (I'm assuming)....I'm completely indifferent and don't even really understand what the Jubilee is," the Vancouver native said.

For others, the Jubilee had a more practical meaning. Josh Peacock, a Canadian expatriate who is working for the Olympic committee, and his friends, Kevin Osborne and Jeff McKinnon, planned to use the diversion created by the celebrations to take in some tourist attractions.

"While everyone is down at the river, we're going to explore everything else," Peacock said.

The three friends, who were taking a breather at the Maple Leaf, agreed that Queen Elizabeth's importance to Canada is cultural and historical, but not political.

"Given our history in the commonwealth, she's culturally important but the monarchy's appeal is sort of dying out with our generation. It is unique that we have a relationship with an older country [the United Kingdon] that gives us our identity," McKinnonn, a graduate student studying in Lund, Sweden, said.

Like Patsy Dennis from Barrie, Kevin Osborne, who is travelling around Europe, mentioned the cross-generational connections created by the Queen. "Knowing a bit about her gives me something to talk to my grandmother about."

Agreed Peacock, "She's been around for so long that my grandmother remembers when she was younger. It's pretty impressive that she's ruled for such a long time."

You do develop a bond with her, McKinnon said. 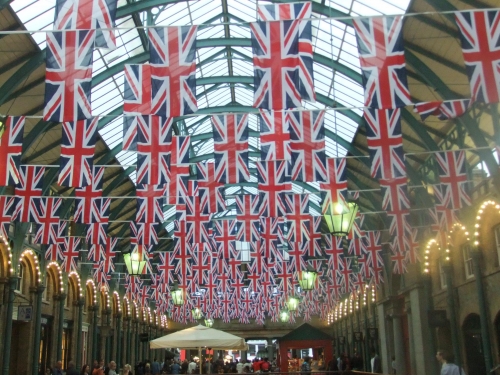 Rows of flags hang from the market in Covent Garden.

In the weeks leading up to the Jubilee, the capital city has been awash in Union Jacks and images of the Queen. Many shops have set up displays marking the queen's big day. On the face of it, it would seem that the British public is gaga about their most senior royal -- but are they? 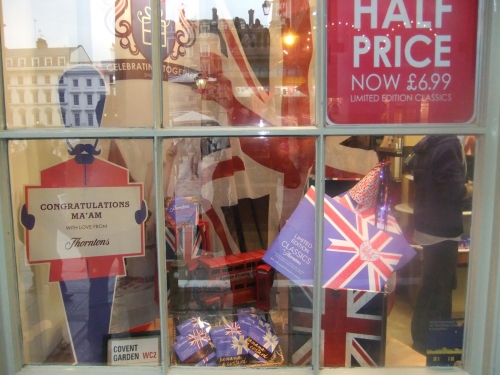 Before moving to London, Patsy Dennis, who is head of marketing at a UK-based company and has been living in England for eight years, was under the impression that everyone bowed down to the queen.

She soon discovered: "No one really cares! It's more of a tourist attraction."

Robertson, the Canadian teacher, said that there are positives and negatives about the continuing existence of the monarchy. For example, he doesn't necessarily think it's right that the public's tax dollars go towards funding the monarchy. But, he said, there are two sides to the story.

Another Canadian ex-pat who has since left the UK claimed that although the queen plays an important role, she means less and less to the younger generation.

"I think that Canadians are more into the monarchy than the British public. This was evidenced by CTVs' countdown to the royal wedding, among other things," said the ex-pat, who wished to remain anonymous.

The former ex-pat had the opportunity to meet the queen last summer at Buckingham Palace. "I got really close to her but didn't have a conversation. She is very poised and the party was a great experience to meet citizens of different commonwealth countries."

Whether you're planning to partake in the Jubilee celebrations, or like Peacock, Osborne and McKinnon, you'll be taking in some British heritage away from the madding crowds, there's no escaping the Jubilee if you're in London this weekend.

Colin Robertson thinks that just might be a good thing. "The Jubilee is a chance for everyone - all the diverse cultures and communities - in the UK to come together and celebrate. British people do not have Canada Day or Independence day so this is a chance for them to celebrate." 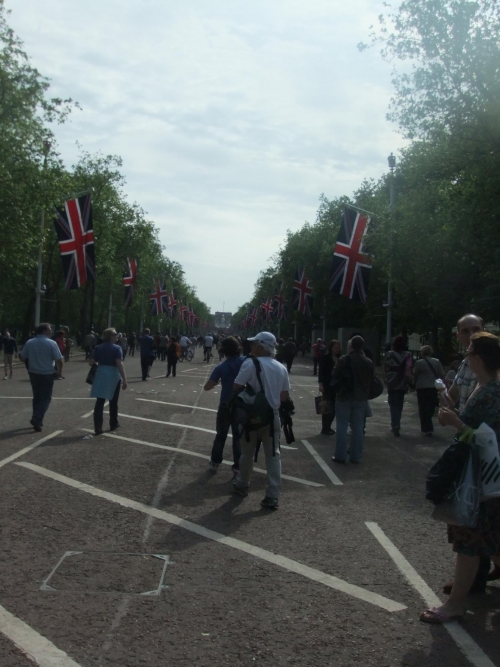 The Mall outside Buckingham Palace on Saturday, June 2.