Maybe this is China's way of telling Harper: 'Hey, we're not so different, you and I.' 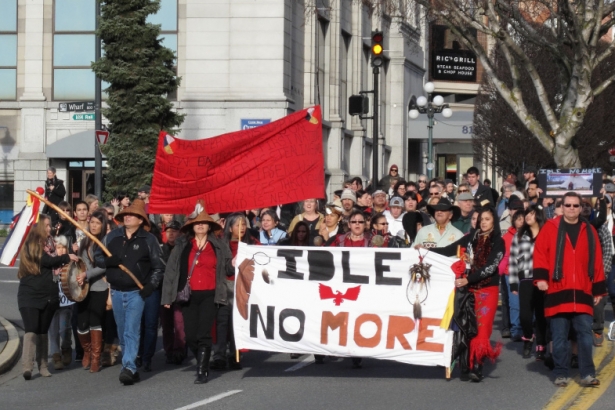 The Assembly of First Nations “wants assurances that all new federal legislation and policies would comply with aboriginal and treaty rights under Canada' s Constitution and be consistent with international human rights standards,” reads one in a series of articles published on the topic by Xinhua News Agency, internationally renowned as Beijing's mouthpiece.

There is none of the bias Xinhua features in what can only be qualified as the government press releases it – quite literally – issues on China's domestic affairs.

Searching for Xinhua coverage of Idle No More on the Internet in Chinese yields third party translations of this and other English language articles. No original content.

Perhaps the movement would not interest Chinese readers as much as content from Xinhua's other international bureaus. Perhaps.

Some may find it puzzling that China, perennially coping with its own comparable ethnic group uprisings – the details of which are strictly censored in Chinese media – is taking a stake in the fair and free coverage of a Canadian First Nations movement.

It's impossible to formally assess Beijing's intentions in this latest string of Canada articles, but there are a few likely possibilities that deserve to be mentioned. Chinese English-language state-owned media often acts as an informal communique of Beijing foreign policy. It's not inconceivable that Beijing should direct a message at the Harper administration -- which in previous years has been much more critical of Beijing's response to riots in the far West. Maybe this is China's way of telling Harper: Hey, we're not so different, you and I.

One SinoFile reader, @LinguaSocMedia, asked The Vancouver Observer a question on Twitter regarding our coverage of China's Southern Weekend press freedom standoff, after reading that Chinese social media sites had only censored search terms on the subject in Chinese, not English:

If they insist on online #censorship, why don't Chinese censors crack down on postings in English?

Our answer: During my earliest days in China, as a Mandarin and political science student, I occasionally supplemented my income by teaching English, just because so many Chinese people were keen to learn it that jobs weren't too difficult to find -- for myself. But the situation was different for my Chinese-American friends.

Chinese people -- apparently in the government as well -- have little faith in Chinese people's ability to speak English, whether they are ESL speakers or born-and-raised American.

In the aftermath of the Southern Weekend dispute, Beijing-based independent Chinese newspaper The Economic Observer published a very sensitive editorial on how integral a free press is to a Marxist society.

Maybe the editorial won't be available to Chinese who struggle with English as a second language. But it exists, beyond the Great Firewall. And so do articles on Idle No More.

The Chinese are coming, and other problematic Canadian sovereignty woes