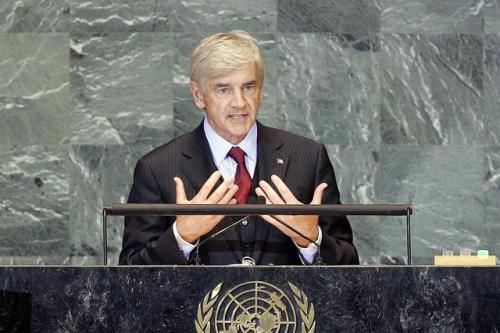 All the rhetoric stateside had Canada winning a United Nations Security Council seat  on Tuesday. The Globe and Mail even published this article outlining what Canada should do when we assumed a seat at the world’s most powerful negotiating table.

So count me in as one of the stunned when the news blared that Canada had been rejected from the big dance. Worse, it seems we’ve been stood up by our dance partners.

The Globe and Mail is reporting that Canada had received 136 commitments of support from the United Nations General Assembly before the vote, comfortably over the two-thirds margin of 127 needed to ascend to the UN’s most prestigious and powerful chamber.

Every teenage boy knows that the only thing worse than being rejected is being stood up.

Oh, but there’s more to this metaphor.

The girls had a choice on Tuesday afternoon in New York City—they could pick between a country with a proud, undeniably rich history at the United Nations, or one whose peacekeeping missions you could count on one hand. They could choose between Canada-- home to one of the writers of the United Nations Charter, a Peace Prize-winning former Prime Minister, and the United Nations Emergency Fund—or a country whose greatest export is probably Cristiano Ronaldo.

The girls danced with Portugal.

(On second thought, perhaps Ronaldo is an unfair advantage after all.)

How could this one not sting? Mr. Harper, despite his investing so much into making Canada a “major world player” with the heavily-debated G8 and G20 conferences mere months ago, lost in pretty spectacular fashion. In fact, the 114 votes Canada received in the first round overstates the support we had: by the second round of balloting, after prom king Germany won the first of two contestable seats, Canadian support disintegrated to a measly 78 tallies.

Head bowed, Canada stepped down to economically-destroyed Portugal for the second and final Security Council seat.

Which begs the question: how did we blow it that bad?

You don’t need to look too far.

No matter how much Foreign Affairs minister Lawrence Cannon wants to blame Michael Ignatieff for undermining his poor pick-up lines, the buck stops with Mr. Harper himself.

“We got outhustled,” Andrew Coyne of Maclean’s said matter-of-factly. Truth is, securing votes in the General Assembly isn’t all about being the best-looking guy on the floor. Its about promising that you’ll take them all out to dinner—individually—after they dance with you.

“Vote-swapping,” in the diplomatic vernacular, is what we needed to do in the weeks and months preceding the vote. We needed to promise countries we would support their agendas.

But that’s hard to do when Harper has made clear in his four years in office that he is religiously supportive of Israel, alienating a bloc of Muslim countries, will cut aid funding to Africa, alienating the continent, and unhappy to receive refugees.

But that’s not the extent of our strategic failures. Canada clearly failed to gain the favours of the few countries that could take with them a bloc of votes of support—think Lindsay Lohan in Mean Girls. Get her vote, and by osmosis, you’ve got six or seven more.

Canadian relations with China obviously went south after Richard Fadden’s imprudent comments on national television. And we can’t possibly hope to dance with India after actively opposing their only Security Council request.

But I think it is fair to say the world as a whole—including Canadians themselves—have begun to question Canada as the big country with the bigger heart.

“Canada used to welcome the persecuted,” a Richmond teacher mused. “Harper’s turned it all backwards.”

Perhaps the girls are taking notice.

We used to be the most popular at these dances—Canada has never lost a bid in fifty years before this week—not because we’re the best looking, but because we were the nicest. Canada was the warm, gregarious kid that every class needs.

If Tuesday’s vote is any indication, Prime Minister Harper is a lot like the bad influence who sits next to you in math class. And he's changed Canada.

“Its not us, its you,” the girls are saying.

That probably stings as much now as it did back in Harper's high school days.

Tony Clement keeps shooting the Tories in the political foot