On being “Too Asian?” 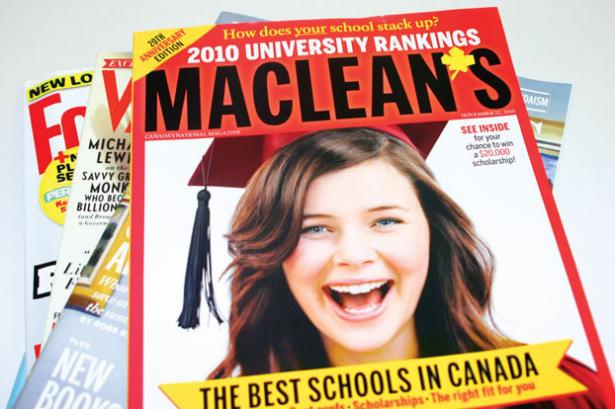 The cover of the November Maclean's magazine that precipitated a national debate on how "Asian" our universities are.

To me, Maclean’s’ article earlier this month wasn’t worth a second glance.

Sure, it was opinionated and statistically suspect.

But hardly revolutionary, I thought.

Guess I was wrong.

The “Asian” fecal storm has been raging for more than two weeks now, and, at the risk of jeopardizing my career, this Asian-Canadian is reluctantly entering the fray.

I’m a first-generation Canadian, the son of parents without college degrees seeking better lives for their children. The first words out of my mouth were in Cantonese and I still have a bowl of rice with dinner every night. I have a mid-90% average at Vancouver’s most prestigious all-boys private school, spent hours slaving before the piano, and lived through many a Saturday where I hopped from tutor to tutor.

But I hardly consider myself Chinese. My maple leaf tattoo, which I will get as soon as my Asian mother gets over the fact that tattoos are not taboo, will attest to that.

But there’s no denying that there’s a stereotypical “place” for Asian students today, especially in the clique-filled bubbles of high school and, to a lesser extent, university.

Maclean’s may not have the hard evidence to back up Chinese, Japanese, Korean, and Filipino students’ work ethic, but any claim to the contrary would fly audaciously in the face of anecdotal experience. Of the forty best students from grades nine to twelve at my school, thirty-five are Asian. That’s 87% in a school where a little more than half (53%) of the class of 2011 is Chinese, Japanese, Korean, or Filipino. The latter number, in itself, should be staggering to observers.

In the meritocratic system that is so highly praised in our society, it would only be natural that the Ivy League would be full of top-10 students. And their 87% Asian representation rate.

But as any Ivy League admissions officer will tell you, like a Yale officer told me, they “want their schools to be microcosms of the country at large.” The intangibles- leadership, character, and yes, even race- are the ways that the school shapes the class that graduates from it, selecting students for rhymes or reasons that they don’t have to disclose to anyone.

One glance at College Confidential’s Results threads will show that Asian students scoring significantly higher in SATs than their non-Asian peers are simply not accepted at a proportional rate. The “Chinese curse” is common knowledge amongst university-prep school circles: “I’m Asian… FML!!!!!” one rejected student techno-screams in frustration on the popular forum. “Asian musician good at math? Don’t even bother trying,” another piece of advice reads. In fact, a counselor who has a record of guiding dozens upon dozens of students to the Ivy League across multiple decades told me that my best shot at admission is “because [I’m] not the cookie-cutter Asian.”

Where Maclean’s goes wrong is in using such a wide brush to paint the Asian community as one that does not contribute to the life of a school. It is impossible to categorize, in such simple terms, a diverse and vibrant collection of individuals.

But it would also be wrong to ignore the cultural norms that bind many with yellow skin. While university counselors everywhere extol the benefits of the “college experience”: independence, growing up, and finding oneself, some Asian parents simply don’t see university that way. Many Asian parents sacrifice tremendously, and not just financially—my parents left their friends, family, jobs, and home back in Hong Kong sixteen years ago—to give their children better shots at higher education. The fact of the matter is that many Asian students aren’t in university to find themselves, discover their passions, or become young adults. Many are eighteen going on forty-eight, career plans already set, and now must read, regurgitate, and bring the A’s back home to Mom.

Some cultures are intensely academically-oriented: the horror stories exist from Korean “hakwon,” or academies, where students return from school for tutoring and, in essence, more school. Many of my friends still go to similar programs here in Vancouver, where they learn Ministry curricula over and over. Friends of friends go to these tutors for six hours at a time, until 1 AM. Some teachers charge up to $80 an hour. And somehow, these classes, in my opinion cruel and unusual punishment, are filled to the brim, waitlists full of Korean, Chinese, Filipino, and Japanese students, without a blond head in sight. 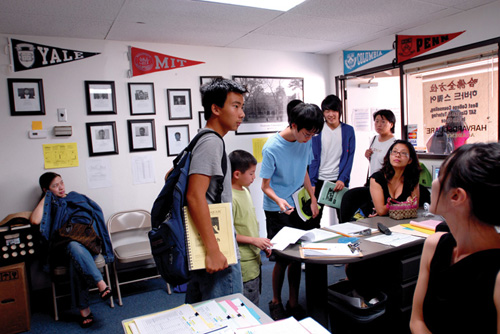 One of Seoul's many hakwons. Note the flags of Ivy League universities mounted on the walls, dangling carrots for Korean students programmed from infancy that they should be aiming for America's most selective, regardless of fit.

And it is tough, when you spend every waking hour reading your textbooks, to contribute to the life of a school. If I’m building a university class, I would rather accept an average student who contributes to a vibrant, active community than a non-student, Asian or not, who disappears beneath his/her books.

Regrettably, the stereotype of the vanishing Asian student is, in my opinion, not completely baseless.

Evidence? None to speak of, except the fact that I know too many. I see my Korean neighbor coming home at 9:30 PM on Halloween not in costume, but in school uniform, bag not filled with candy, but with Biology texts. I see my Chinese friends given the ultimatum “HYPS or nothing” (read: Harvard, Yale, Princeton, Stanford, or we’re not paying for your schooling). I have Filipino peers that have missed out completely on what high school is all about and risk doing so again in university.

It’s an unattractive “community”—one of fever-pitch pressure, life quantified numerically, and young people sacrificing any semblance of pleasure for the ever-elusive 98%. Who would want to grow up in an environment like that?

I know well that not every Asian fits the condescending cookie-cutter. But that doesn’t stop me from trying to escape the bakery completely in my search for a university that will be home for the next four years.

One of my many criteria?

A campus that isn’t too Asian.