The oil sands are cranking up their carbon output as fast as ordinary Canadians are making cuts. But the companies don't plan on paying for more than their fair share. 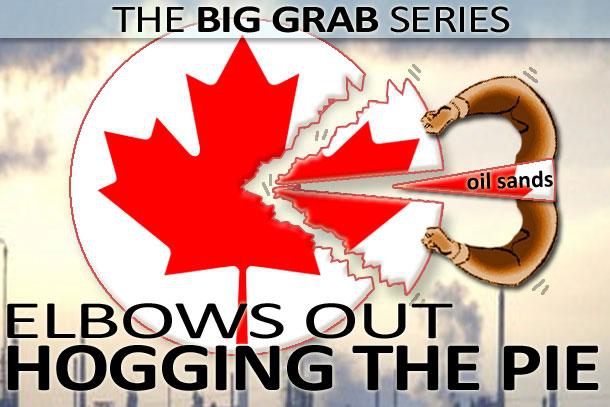 Proponents of oil sands expansion say the oil sands' climate emissions are tiny compared to other really, really BIG sources -- like the burning of coal in the U.S. Maybe so. But Canadians don’t live in the U.S. As far as our Canadian economy is concerned, the oil sands' emissions are growing so large, and so quickly, that they are forcing other sectors to make much bigger cuts, threatening jobs and GDP for Canadians.

Prime Minister Harper made an international pledge, linked with the U.S., to shrink the CO2 emissions from each economy by 17 per cent of 2005 levels … by 2020. At the same time, the oil sands corporations have made their own set of plans to increase their CO2 pollution by 250 per cent over the same time frame.

In 2005, extraction and refining of oil sands took up four per cent Canada's climate pollution footprint.

Anything more than that four per cent share requires other sectors in our economy to squeeze out extra and give those emissions rights to the oil sands to use instead. Rapid climate pollution growth in one area now requires even more rapid cuts from others.

In the last five years, oil sands increased their CO2 emissions by 42 per cent. They now take a six per cent slice of Canada's limited CO2 pie.1

The oil sands want to triple their current share of our CO2 allotment in just 10 years, quadrupling their baseline year (2005) share. The Pembina Institute puts the oil sands' 2020 appetite as high as 23 per cent of our pie.3

Even young kids, with forks in hand, know what to call this kind grab: hogging. 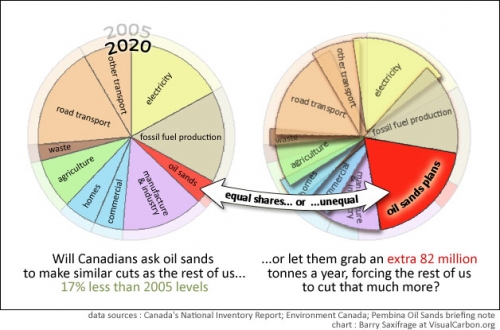 It would be one thing if the oil sands corporations were willing to pay what it costs other Canadians to cut that much extra CO2 for them. But so far, they aren’t.

More than all of Canada's homes and buildings

For perspective, the extra 14 per cent of the pie – 82 million tonnes –
that the oil sands are planning to squeeze out of the rest of the economy in less than 10 years is more than all the CO2 pollution emitted by all Canadian homes, commercial and institutional buildings.

If Canadians were to pour all our low-carbon efforts and resources into completely eliminating the fossil fuel pollution from all our millions of buildings by 2020, all those gains and more would be wiped out by just the oil sands pollution increases. Pollution increases they haven’t offered to pay for.