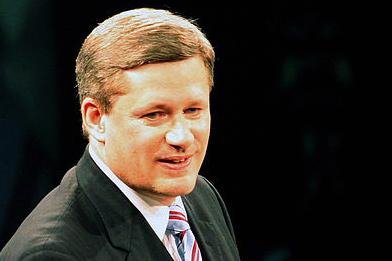 OTTAWA -- The Conservative party is scrambling to stem a growing tide of campaign controversy over abortion-related comments made by a Tory candidate in Saskatchewan.

Leader Stephen Harper was forced Wednesday to repeat his vow that a Conservative government would never reopen the contentious debate about abortion rights in Canada as long as he's prime minister.

The abortion issue plagued the party's attempts to gain power in 2004 and helped contribute to a Liberal minority that year.

Harper's comments came after candidate Brad Trost told an anti-abortion group on the weekend that International Planned Parenthood Federation has been denied Canadian funding because it supports abortion.

Harper dismissed concerns that arose about the comment, insisting that Canadians are focused on the economy, not on abortion rights.

But NDP Leader Jack Layton, whose party supports "a woman's right to choose,'' calls reports of Trost's comment "worrying'' and says that they imply the Tories harbour a hidden agenda on abortion.

Layton said the brewing controversy "certainly gives us concerns about the Conservative approach.''

Conservative spokesman Dimitri Soudas summoned journalists in the middle of the night to address the Trost reports and sing the praises of the government's G8 initiative on child and maternal health.

International Co-operation Minister Bev Oda also issued a statement insisting Planned Parenthood would get funding if its application "falls within the government's parameters.''

The group has been waiting for money for more than a year and assumes it has been cut off -- the same fate of other non-governmental organizations that have fallen out of favour with the Harper government.

Despite Harper's protestations, the issue is now back on the front burner of the election campaign, with less than two weeks before Canadians go to the polls.

The Tories have run the same tight, orchestrated campaign that delivered Harper to power in 2006.

But they are clearly moving to avoid a repeat of the 2004 election campaign gaffe that saw backbencher Cheryl Gallant compare abortion to the beheading of hostages in Iraq, spoiling Harper's first attempt to win power, and giving the Liberals a minority government.