The oil sands have a dirty little secret: They generate far fewer jobs and wealth per tonne of carbon dioxide than other industries. 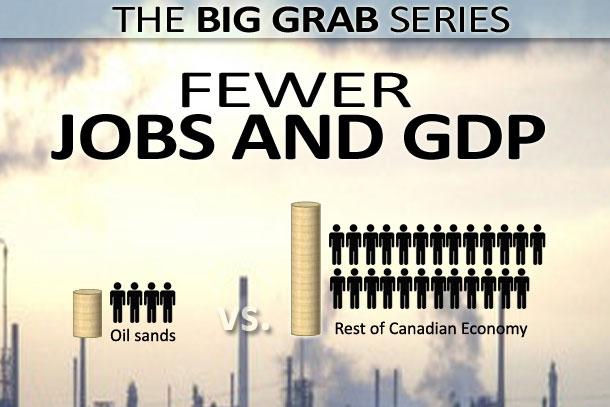 The Achilles’ heel of the oil sands threatens to cripple the rest of Canada, or themselves: The oil sands generate six times fewer jobs and three times less GDP per tonne of CO2 (tCO2) than by the rest of our Canadian economy.

For oil sands corporations to expand their CO2 pollution now, they must squeeze that extra CO2 from some other part of our economy. How can this be done without squeezing out more prosperity than they can deliver?

There is little doubt that the oil sands have generated lots of additional dollars and jobs for the Canadian economy – so far. the Canadian Association of Petroleum Producers (CAPP) booklet "The Facts on Oil Sands" says that oil sands generate 144,000 "direct, indirect and induced jobs." That’s about 0.8 per cent of Canada’s over 17 million employed workers. Fort McMurray is a boom town. And Canadians need jobs.

How safe are Canadian jobs if the oil sands corporations force the rest of the Canadian economy to quickly give up millions of extra tonnes of CO2?

According to Environment Canada and the Canadian Energy Research Institute (CERI) data, the oil sands generate around $680 per tonne of CO2 emitted.3 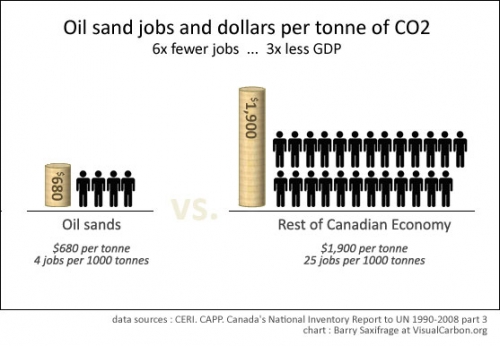 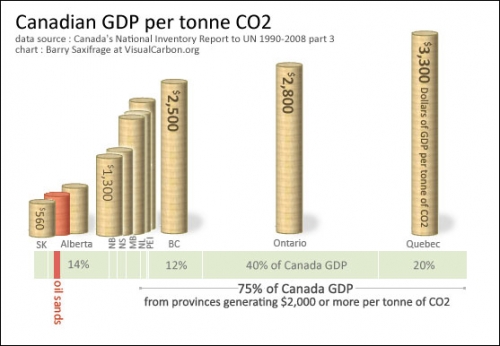 For our economy to continue thriving while producing ever less CO2 pollution, we now must do better at maximizing Canadian jobs and dollars per tonne of CO2.

“Inaction will also cost jobs,  because emission-intensive economies will become uncompetitive in a low-carbon world. In the quest for comparative advantage, investment will flow towards those countries that can offer more output for fewer emissions.”

Yet the under-performing oil sands are planning to take hundreds of millions of extra tCO2 away from other parts of our Canadian economy in the next ten years. And so far, they are refusing to pay what it costs for others to shoulder this extra burden for them. Will this be a federally controlled, massive transfer of wealth from the rest of Canada into Alberta’s economy?

The 99 per cent of Canadians whose jobs are unconnected to oil sands have the right to know if their future prosperity will be sacrificed, and to respond. Canadian businesses and families can’t judge their risk until Canada implements a comprehensive plan that explains where the CO2 cuts are coming from and who will pay for them.

An “all oil sands” economy