Canada has fallen steadily behind the U.S. and other countries in maximizing wealth per tonne of climate pollution. That's putting our future prosperity -- and costs -- on the line. 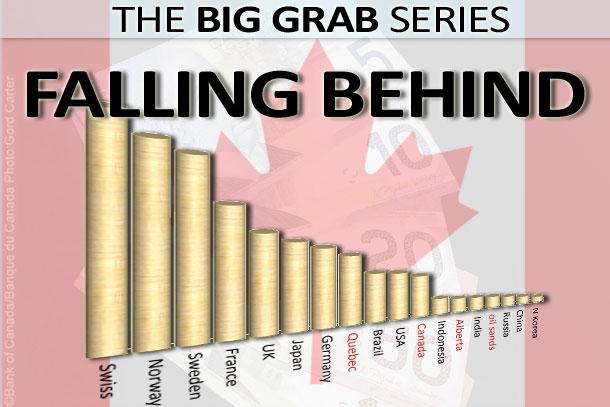 The foundation of future prosperity in a low-carbon economy is to maximize wealth per limited tonne of CO2 (tCO2). In 1990, according to Environment Canada, both the American and Canadian economies created the same wealth per tCO2.

Falling behind the U.S.

In the last couple of decades, our Canadian economy has fallen steadily behind the U.S. in maximizing wealth per tCO2, which is needed to build the foundation for prosperity in a lower-carbon future1: 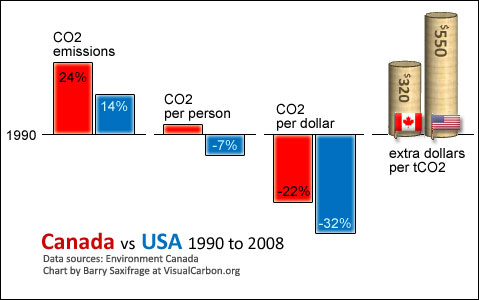 Losing to other nations

Canada is the second-worst performer out of the 17 economies in the Organization for Economic Co-operation and Development, in both tCO2 per person and in creating wealth per tCO2. A few examples of this gap: 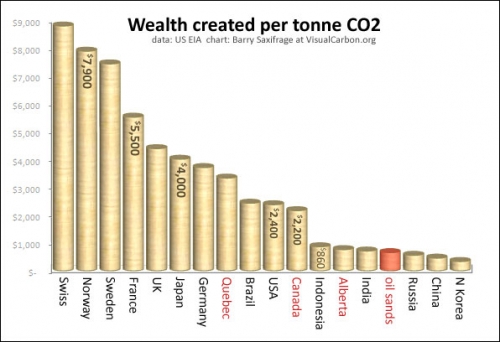 According to recent U.S. Energy Information Agency data, Canada’s economy today produces about $48,000 and emits 22 tCO2 per person. At some point in the next two or three decades, we will have to cut our climate pollution per person by half.

Sinking in an expanding tar pit

The oil sands are the only industrial sector in Canada whose emissions are getting significantly worse3. They are poised to go from four per cent in 2005 to 18 per cent of our national allotment by 2020. And yet they deliver so little wealth and jobs per appropriated tCO2.

Taking all that extra CO2 allocation from one part of our economy and giving it to the oil sands without making them pay for it will create some jobs and wealth for the oil sands. But only about one per cent of Canadians, almost all of them in Alberta, will benefit, while many more stand to be hurt by it. As they say, it's nice work if you can get it.

Because this unfunded Big Grab by the oil sands requires Canadians in the wider and more productive-per-tonne economy to cover the costs and reduce so much more rapidly, it risks eliminating more jobs and wealth than it creates. It also creates the risk of our economy falling farther behind the U.S. and other partner nations in future prosperity as our economy’s allotment of CO2 eventually shrinks.