Prince William and Katie Middleton, the Duke and Duchess of Cambridge, are making their way across the pond to visit the former colony in approximately one week. While not exactly roughing it in the bush, the royal couple will canoe in the Northwest Territories, attend cultural performances in Prince Edward Island and participate in the Calgary Stampede. A street hockey game is thrown in the mix, too. Let's hope this one runs a bit more smoothly. 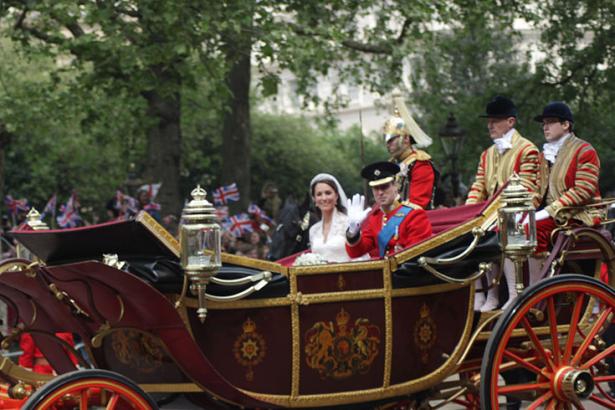 OTTAWA -- Prince William and his new bride Catherine will travel by passenger jet, bush plane, naval frigate and canoe as they tour Canada next month on their first official overseas trip since their April 29 wedding.

The royal couple will attend Canada Day celebrations in Ottawa, dragon boat races in Charlottetown, a street hockey game in Yellowknife and the Stampede Parade in Calgary during their nine-day visit.

William and Kate's official itinerary, just released, sets a busy pace for the young couple, beginning with their arrival in Ottawa June 30 and ending with their departure from Calgary July 8.

They'll also visit Quebec, where they'll tour a children's hospital in Montreal and attend a military ceremony in Quebec City.

In between, they'll spend a night aboard HMCS Montreal, a navy frigate, for a leisurely sail down the St. Lawrence River.

In Yellowknife, they'll board a float plane for the isolated native community of Blachford Lake, where they'll take a canoe ride before departing the Northwest Territories for the Calgary Stampede.

An itinerary of William and Kate's Canadian tour has been released. Some highlights:

6:00 p.m. -- Youth barbecue and reception in garden of Government House.

10:05 a.m. MT -- Arrive at Yellowknife Airport for departure and retreat.

Royal wedding rehearsal: Prince William and Catherine Middleton in the house of love