But we'd like to be let in. And it looks like Harper is trying to get that to happen. 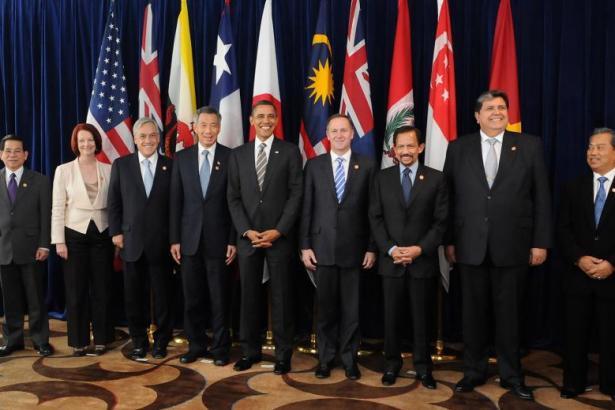 Photo of leaders of present and prospective members of the Trans Pacific Partnership courtesy of Wikimedia Commons. Notably absent is Canada.

Prime Minister Harper wasn't admitting that Canada has been sidelined from an important new trade group that's emerging, but he was expected to be locked in pre-APEC talks with China later today -- and their mutual exclusion from the Trans Pacific Partnership just might be on the agenda.

Or maybe he was admitting it. Questioned this afternoon, International Trade Minister Ed Fast said Canada has expressed interest in being at the table for talks on the new Asia-Pacific free trade group, but won't "pre-negotiate" entry into the club.

As world leaders from the Asia Pacific group meet in Hawaii, Canada is notable by its absence from the new TPP, a group that U.S. President Barack Obama has called  “the most promising vehicle” for economic integration in Asia-Pacific and the “next phase” of the U.S. trade agenda.

Canadian Press has the latest details of Harper's meeting with China today:

The bilateral meeting with Jintao will follow similar talks with the leaders of Chile and Peru.

Canada has been courting stronger trade links with China since the Conservatives came to power in 2006, although Harper didn't make his first visit there until 2009.

At the Hawaii meetings, China and Canada are linked by both being on the outside of negotiations for the formation of a new trans-Pacific trading block.

Though observers have pegged Canada's exclusion to supply management policies, Japan -- which has a similar approach -- is now at the table.

China says it hasn't been invited to join the talks either and says the U.S.-led negotiations are too ambitious.

No decision has been made yet as to whether Obama and Harper will also sit down face-to-face.

The two were supposed to meet Sunday night with Mexican President Felipe Calderon for the North American leaders summit.

But Calderon has pulled out of the meetings after his interior minister was killed Friday in a helicopter crash.

After his bilateral talks, Harper will attend the opening event of the APEC leaders summit, which is being hosted by Obama.

While the 21 members of the Asia-Pacific Economic Co-operation forum are expected to outline a series of steps to move forward with a trade agenda, the real meat of the meetings will be served on the sides at negotiations for the formation of the Trans Pacific Partnership.

Membership in the TPP is coveted because the deal is being led by the U.S., and because it links together hotly-sought after markets in the Asian Pacific region.

The goal eventually is to expand membership to the entire APEC bloc but that will require member countries to seriously curtail government subsidies not available to private entities.

Japan has announced no timetable for joining the group, only its intention to join.

But the inclusion of the world's third-largest economy would vastly expand the reach of the trade pact, which now includes the smaller economies of Chile, New Zealand, Brunei and Singapore. The U.S., Australia, Malaysia, Vietnam and Peru are negotiating to join.

Publicly, the Canadian government says it's not sure it wants to be part of the deal.

But behind the scenes, there is frustration that Japan -- which protects its rice farmers in a way similar to how Canada's dairy farmers are protected -- is at the table for the TPP while Canadians aren't.

Canada's supply management policies are cited by observers as the reason the country hasn't been invited to the TPP talks. They say that in the absence of a TPP membership, Canada must forge ahead with it's own bilateral deals in order to get a strong foothold in the growing Asian Pacific economy.

HONOLULU -- The international trade minister now says Canada has expressed interest in being at the table for talks on a new Asia-Pacific free trade group, but won't pre-negotiate entry into the club.

Ed Fast acknowledged that some countries are resisting Canada's membership into the new Trans Pacific Partnership, but he wouldn't say who.

He says there's been suggestions that Canada ought be to pre-negotiating its position but Canada feels all the issues should be discussed at the formal negotiating table.

Nine economies are currently involved and Japan has also expressed interest in joining, signalling a willingness to set aside some of its supply management programs to have a role.

Fast refused to say why Canada isn't prepared to do the same, only that the government intends to continue to support the interests of Canadian farmers.