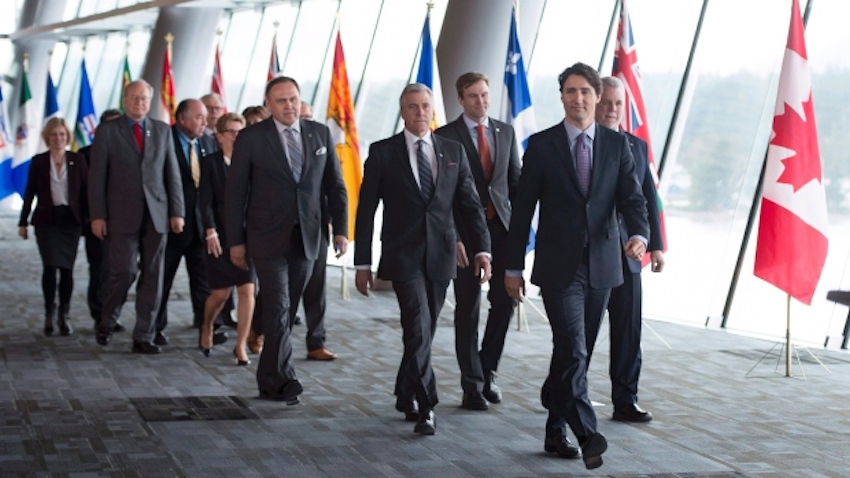 VANCOUVER — An agreement on climate change has changed the political climate for Canada's three northern territories as well.

"Canada's northern and coastal regions are particularly vulnerable and disproportionately affected by the impacts of climate change," reads the Vancouver Declaration, signed by all 13 premiers and Prime Minister Justin Trudeau.

It may not seem like much in a document that runs over 2,500 words, but for the leaders of Yukon, the Northwest Territories and Nunavut it was a big win. With a combined population less than half that of Saskatoon, they're not used to having their interests specifically mentioned.

"I am pleased that Yukon and northern interests have been accommodated in our agreement today," beamed Yukon Premier Darrell Pasloski.

"The provinces and territories agreed to work with the government of Canada to explore a number of solutions including looking at regionally appropriate carbon pricing mechanisms."

Regional flexibility was a refrain at Thursday's get-together, with each premier anxious to ensure the climate change achievements of their provinces were acknowledged. Saskatchewan fought to have its carbon capture and storage project recognized as a way to price carbon and New Brunswick insisted it should get credit for its hydro power investments.

But the three northern premiers — Pasloski, the N.W.T's Bob McLeod and Nunavut's Peter Taptuna — made common cause and succeeded in getting the attention of their colleagues from larger jurisdictions.

Several times, the declaration singles out the special needs and circumstances of Canada's Arctic and the people who live there.

Again and again, provincial leaders stood in front of microphones and talked about the need for northern climate change investments, such as getting rid of the aging, polluting generators that power most Arctic communities with expensive, high-carbon diesel delivered over ice roads or by barges.

A 2015 Senate committee concluded northern electricity systems are "aging, underperforming and at capacity."

In Nunavut, 13 of the territory's 17 generators are at least 35 years old.

Such facilities not only emit greenhouse gases, they are important sources of black carbon, or soot, that hastens the disappearance of snow cover and sea ice by darkening it so that it absorbs more of the sun's energy.

They're expensive, too. Power costs are a significant component of the high northern cost of living.

The Vancouver Declaration makes specific mention of those generators, promising early action on "clean energy solutions to help get indigenous, remote and northern communities off diesel."

No wonder Pasloski and his territorial colleagues were pleased.

"We need flexibility to combat climate change in a way that makes sense for Yukon and doesn’t impact our fragile northern economy,” he said. "We are already investing in building retrofits, biomass energy generation, hydro expansion and a range of other carbon reduction efforts."