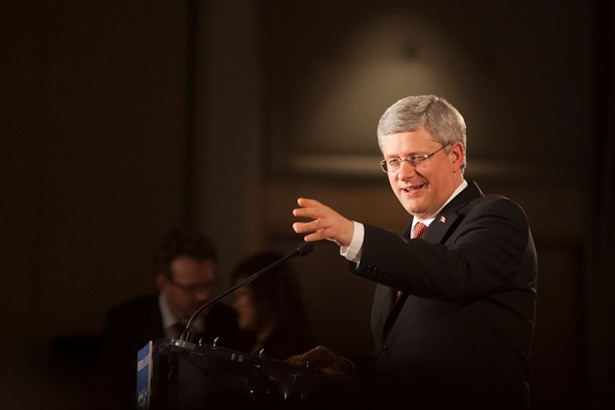 “Canada and the U.S. are making important progress on enhancing trade, travel and investment flows between our two countries, including securing our borders, speeding up trade and travel, modernizing infrastructure in integrated sectors of the North American economy, and harmonizing regulations,” Harper said at the event. “But there is much more that can be done, and must be done, to make our economic relationship more productive and seamless.”

The event, organized by the Canadian American Business Council, gave Harper the opportunity to tell an audience of American business executives that he wouldn’t “take no for an answer” on the controversial Keystone XL pipeline, planned to carry tar sands crude from Alberta to oil refineries in the Gulf of Mexico.

The hotel bill for the luxurious New York Palace Hotel, which was mistakenly sent to CTV’s Washington bureau, suggests Harper’s speaking engagement was a staged promotional gathering for the Keystone XL, rather that a typical guest speaker event which are usually paid for by the host.

According to CTV, the event was co-hosted with the Canadian American Business Council, which claimed to ‘share’ the costs for the event with the Harper Government.

Maryscott Greenwood, senior advisor for the Council said, “the costs were shared…we paid for pieces of it.”

On their website the Canadian American Business Council claims to be “the voice of business in the world’s most prosperous relationship. Established in 1987 in Washington, D.C., the Council is a non-profit, non-partisan, issues-oriented organization dedicated to elevating the private sector perspective on issues that affect our two nations, Canada and the United States.”

Membership to the Council requires a $5,500 annual fee, with conference sponsorships running up to $25,000 per event. Members of the Council include the Canadian Association of Petroleum Producers, the Canadian Embassy, the Government of Alberta and TransCanada among many other major oil and gas companies. 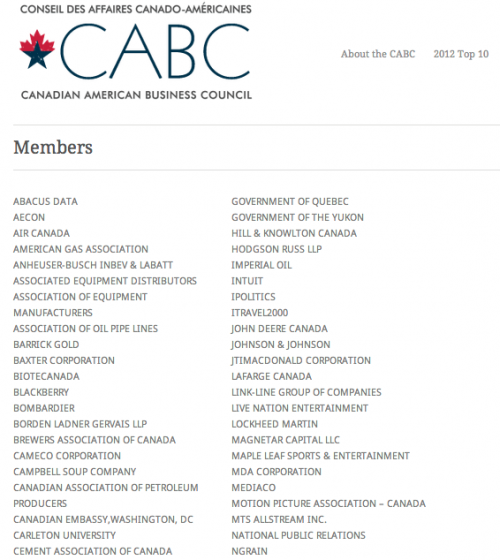 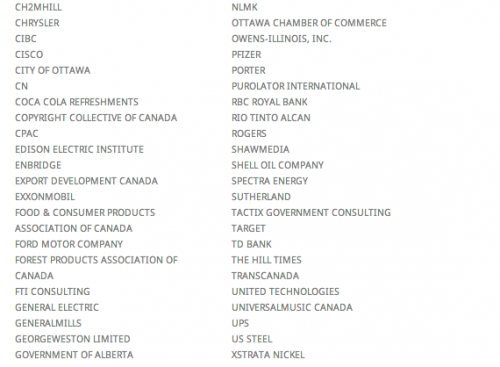 In 2012, the Council listed “Approval of the Keystone XL pipeline that would bring Canadian crude oil to the U.S. gulf refineries” in its top ten ‘list of issues.’

According to further lobbyist documents, Shaw was also hired by the Canadian Association of Petroleum Producers, Canada’s largest oil and gas lobby firm, to speak with members of the U.S. Senate and the U.S. House of Representatives about American environmental legislation or policies that might have implications on the development of Canada’s tar sands.

A recent white paper report released by DeSmog Canada shows TransCanada has spent $2.78 million on in-company lobbyists and $1.26 million on U.S. based lobby firms, including McKenna, Long & Aldridge, since 2010. 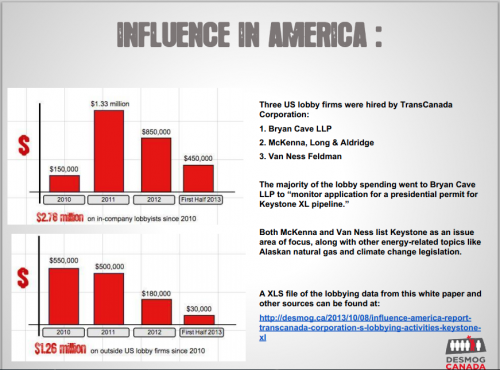 The white paper also shows that since 2010-2011 the Harper Government’s spending of taxpayer funds to promote the tar sands and Canada’s environmental performance has increased by 7000 percent with plans to further increase in the 2013-2014 year.

For more information on lobbying for the Keystone XL, see this backgrounder put together by Friends of the Earth or read about the pipeline on DeSmogblog.com.

Taxpayers on the hook for Lac Mégantic damage: expect the same for pipelines, says economist