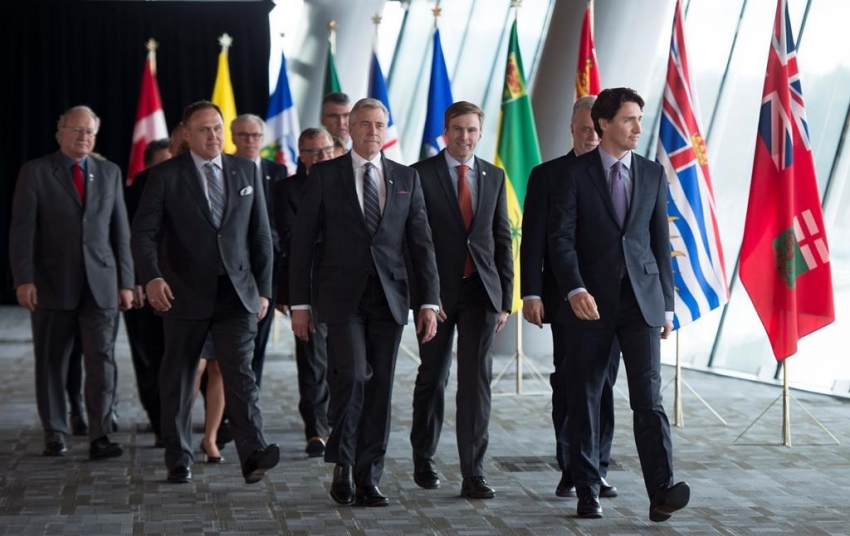 Canada's first ministers emerged from two days of talks this week with an agreement on a plan to develop a framework for climate policy action. Photo by The Canadian Press.

VANCOUVER — If 80 per cent of life is just showing up, in politics the total is probably closer to 90.

Canada's first ministers emerged from two days of talks this week with an agreement on a plan to develop a framework for climate policy action.

It would be easy to mock.

But serious observers who study the difficult politics and policy of climate change believe Prime Minister Justin Trudeau and the provincial and territorial leaders did more than just show up at the Vancouver Convention Centre.

"Maybe the most significant thing is, for the first time since I've been premier, and for the first time in 10 years — I guarantee — premiers have sat around the table with the national government and talked about climate change," B.C. Premier Christy Clark said after the dust settled Thursday.

"This is not the end. I understand that. But I hope Canadians will look at it and say, they got together, they made progress, it's a start."

The 14 first ministers overcame some deep divisions over carbon pricing to find a workable solution that satisfied all parties — at least until four working groups make public their deliberations next October.

It's not the shining new Canadian target for reducing greenhouse gas emissions promised by Trudeau during last fall's election campaign, nor the finished carbon blueprint that was supposed to be drafted within 90 days of the December climate summit in Paris.

She cited the inclusion of federal and provincial finance ministers, who will receive the report on carbon pricing mechanisms, the role of economic development ministers in clean-tech economic growth and competitiveness, and the promised public reporting of the working groups.

"It may not be obvious how well thought out this plan was," said Bak.

The plan is one part. Provincial buy-in is another.

The lubricant may be federal deficit spending.

"The federal budget is going to be a very key moment to see how much resources are put on the table," Manitoba Premier Greg Selinger told an evening panel late Thursday at the adjacent Globe clean-tech conference.

As Perry Belgarde, national chief the Assembly of First Nations observed in Vancouver this week: "We have to start making decisions that will affect seven generations down the road."

Yet most of the media attention focused on the passing (and disputed) economic impacts of carbon pricing in the short term.

Ontario Premier Kathleen Wynne appeared to set the agenda back to square one when she framed the leaders conference as a discussion over whether climate change is really a pressing policy challenge.

"If we've had the initial discussion about agreeing on what the problem is, and agreeing on the magnitude of the problem, then we'll be able to move to, 'Well, how are we actually going to do this?' " Wynne told reporters earlier this week.

But the political cajoling may obscure all that actually is happening on the climate front.

"We are a great mash-up here of the leadership it's going to take" to address climate change, Vancouver Mayor Gregor Robertson told the Globe delegates to open the convention, with Trudeau in attendance.

Probably the most remarkable aspect of this week's talks was the loose media access — a stark contrast to the highly controlled events typical under the previous Harper government.

Reporters freely wandered the halls of the convention centre, mingling among premiers as they casually greeted visiting indigenous leaders. The atmosphere gave at least the appearance of candour.

Holding the first ministers meeting adjacent to the Globe clean tech conference, where some 2,000 delegates from more than 50 countries enthused about the opportunities of the coming energy revolution, also helped fan a feeling of optimism too often absent from climate negotiations.

From the indigenous leaders who were invited to speak with the first ministers on Wednesday to the environmental groups who hawkishly eyed the final communique, the refrain was the same.

It's a start. They showed up.

America has a climate plan. Time is running out for Canada to find one...