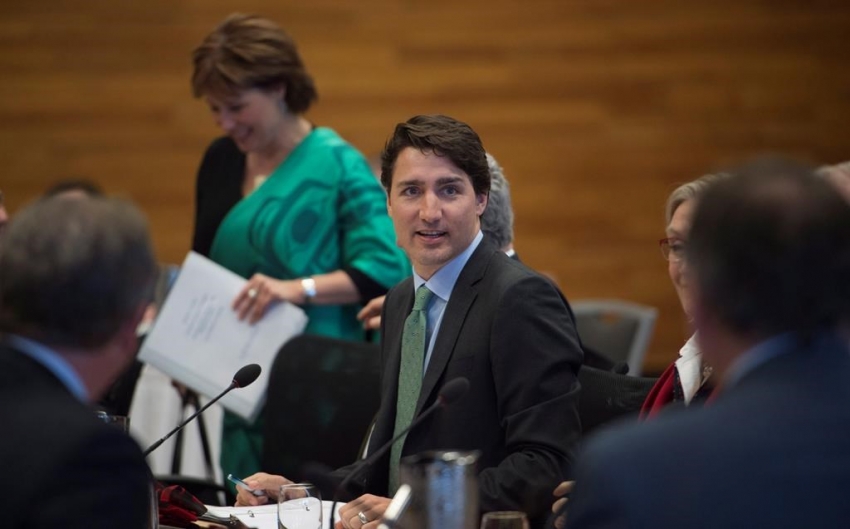 After meeting with premiers in Vancouver, Prime Minister Trudeau announced carbon pricing will be part of national climate plan. Photo by Canadian Press.

He says they will study pricing options that would be adapted to the specific circumstances of each province and territory.

The working group is one of four announced by Trudeau in Vancouver on Thursday after a day-long climate-change meeting with first ministers.

Trudeau said they are to meet again in the fall when the working groups are to report back.

"The commitment we made today, with the Vancouver Declaration, shows all first ministers in this country united on carbon pricing mechanisms," he said.

"The fact that we have consensus on the need to include carbon pricing in our approach to addressing climate change right across the country is a great thing indeed."

"That is something we have all committed to. Now, the working group that we have put together will dig into the mechanisms that will be most effective and most appropriate for each jurisdiction, recognizing that there are areas that face greater challenges."

The federal government has been quietly insisting for weeks that a national carbon price, as promised in the Liberal election platform, will be imposed from above if provinces are unable to agree.

The day started with several premiers pushing back against that federal resolve.

Nova Scotia Premier Stephen McNeil suggested there was "more than one way to deal with the carbon issue."

He said Atlantic Canada's heavy spending on hydro-electric transmission has effectively already built in a carbon price with electricity rates that are the highest in Canada.

Yukon Premier Darrell Pasloski said he and his fellow territorial premiers are against imposing additional costs on consumers of fossil fuels in the North.

Brad Wall of Saskatchewan came to Vancouver warning against a carbon tax in a fragile Canadian economy, but cleared the air late Wednesday by saying his province would participate "constructively" in any working groups.

Manitoba Premier Greg Selinger, who like Wall faces re-election this spring, said there's a common understanding among premiers that action on climate change can and should take many paths.

"The do-nothing option is not there," he said.

It was Trudeau's second meeting with the premiers since he took office in November.

Canadians are ready for carbon pricing, politicians not so much: experts

Napoleon, carbon pricing and the cost of uncertainty in Canada

America has a climate plan. Time is running out for Canada to find one...