Before his death in 2004, Lloyd Cross, couldn't believe that the country he fought for would refuse to recognize his daughter as Canadian. Missing his first Remembrance Day parade since the end of World War II that same year, his daughter, Sheila Cross, marched in his place. For Walshe, the battle her father waged in Europe all those years ago ended in 2009, but not without a cost. 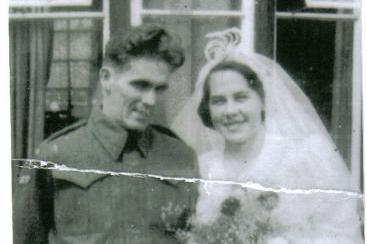 Sheila Walshe's mother and father on their wedding day in 1942.

Sheila Walshe, 67, holds a Canadian record that will likely never be broken. She has been a Canadian citizen, not once, not twice, not thrice, but four times. Her most recent acclimation came in 2009, when a brown letter from Ottawa arrived on her doorstep in Kelowna, BC, saying the government now recognized her birthright from the date of Canada’s first citizenship act, January 1, 1947.

“I’ve got two citizenship cards now, and they are not going to take them from me, I can guarantee you,” she said with an enthusiastic British accent in a phone interview with the Vancouver Observer.

You might think Walshe to be a decorated war veteran, a Noble Prize winning scientist, or maybe a hero who saved a busload of children from a burning school bus to warrant such special attention, but that’s not the case. To count her lucky would be a testament to resilient optimism. The only prize for Walshe’s four-times-Canadian record is relief. Her commendations cost her entire life savings to fight, and tested her faith in the country she calls home.

Walshe’s 18-year ordeal began in England in 1991 when she applied for her Canadian passport.

“In June, 1992, I got the letter saying I had a claim for Canadian Citizenship, however, I ceased to be a Canadian citizen on March 30th, 1967, because I did not reside in Canada on my 24th birthday.”

Until Amendments to the Canadian Citizenship Act were made law with Bill C-37 in 2009, if a Canadian born abroad did not reside in Canada on their 24th birthday they could be stripped of their citizenship. At twenty-four, Walshe was in England.

"I was totally unaware of the necessity. I had always accepted it as a fact that I was one [Canadian]," she said.

And as if this outdated law wasn’t enough to put the nail in the coffin of Walshe’s Canadian identity, the letter also said that because she hadn’t taken steps as a youth to reaffirm her Canadian status, she was twice-over not entitled.

Walshe’s citizenship woes originated during the turbulent years before she was born. In 1941, her Canadian father, Lloyd Cross, a veteran of Canada’s tank divisions in World War Two, fell in love with her British mother whom he married in 1942.

“My father was in the Three Rivers Tank Regiment, based in Worthing, Sussex, England. He requested permission from his C.O. to marry, and this is recorded in his Army records, of which I have a certified copy, Dad got it for me. He was granted permission to marry and the following year I was born.”

Her father was fortunate to survive some of the hardest fought battlefields in Italy and Germany, and at wars end moved his wife and three-year-old daughter to Canada. Fate, however, would not be as kind to her parents as it was to him during the war (he survived two tank wrecks). For reasons Walshe doesn’t know to this day, her mother whisked her and her two Canadian born siblings back to England in 1952, telling the kids their father had died. Walshe was nine years old.

“This was without my fathers knowledge, so I was, in fact, abducted, with absolutely no choice in the matter,” Walshe said, spending her youth and adult life in England under that assumption.

On a whim in 1990, she sent a postcard to distant relatives in Canada. With great shock, came a very strange reply. It was from her father. Forty years of separation flashed through her eyes as she realized her life had been based on a lie. She visited Canada as soon as possible where she was welcomed with open arms by her new found Canadian half siblings and her father.

“Always I was yearning for the land in which I had known such happiness as a child.”