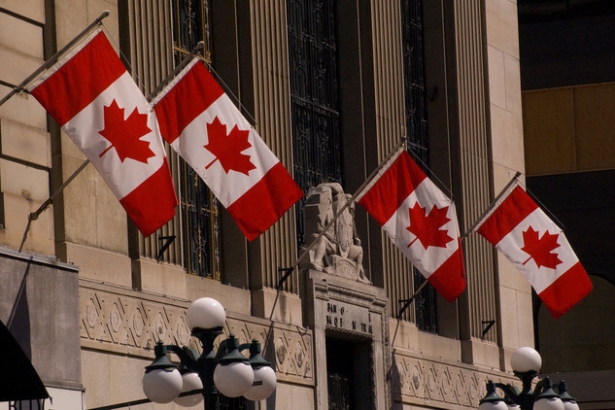 Photo of Canadian flags in Ottawa via Paguma on Flickr
Jackie Scott and Linda Missal De Cock have collectively lived in Canada for over a century. Scott, the daughter of a war bride and Canadian soldier, arrived in Canada from England in 1948, and resided here for over half her life. De Cock, meanwhile, has lived in Canada for 69 out of 70 years. The women, living on opposite ends of the country, went to school, married, and carved a life out for themselves in Canada.
But bizarrely -- even as Canada accepts 250,000 new immigrant Canadians a year -- government has denied such individuals citizenship.
They are among the "Lost Canadians," a group of Canadians who have been denied or stripped of citizenship by federal government due to legal technicalities. While the majority of these cases have been resolved through the 2009 Bill C-37, An Act to Amend the Citizenship Act, some people are waiting years to receive the same citizenship papers that others -- such as Bollywood actor Akshay Kumar -- was granted within weeks.
Lost Canadians: from citizens into refugees

"Canada's doing everything completely backwards," Lost Canadians advocate Don Chapman commented on the issue.
"The objective is to turn immigrants and refugees into Canadian citizens -- not the other way around."
Chapman, who was born in Canada to Canadian parents, has experienced the same situation that he sees others go through today. An airline pilot, Chapman is as Canadian as people come: his great-grandfather was one of the Fathers of Confederation, and the Chapman Learning Commons at the UBC Library is named after Chapman's father, Dr. Lloyd Chapman.
Yet he was among some over 200,000 Canadians who were denied citizenship due to outdated laws -- some still being enforced by the government -- which treats women and children as property of their husband or father.
After years of advocating, Chapman proved that there were tens of thousands of cases like his own and helped push through Bill C-37. But it was an incomplete solution, he said, which inexplicably excluded people born prior to 1947, while creating a whole new category of stateless Lost Canadians born abroad.
Chapman often receives distressed calls and emails from people from Canada and around the world who believed themselves Canadian citizens and recently discovered that they may not be. In some cases, children born abroad since 2009 to a Canadian parent are stateless, causing significant troubles for their families. Without citizenship, passports and travel documents, as well as health insurance and pensions, become difficult or downright impossible to obtain.
CBC report on Lost Canadians who remained stateless after Bill C-37

A "flaw" in the Canadian citizenship system?
In Chapman's view, there is a "fundamental flaw" in the system to deal with citizenship issues in Canada, and it's causing headaches for long-term Canadians who have long contributed to the country.

"I've had military people on this (Lost Canadians) boat," Chapman said. "I've had people say, 'If I'd known that Canada would do this to me, I would have never volunteered to be in the military.' And why would you?"

One particularly sad case, he noted, was Guy Valllière, a Quebec-born and raised former soldier who went to serve in the Second World War.

Harper government criticized for lack of understanding of citizenship laws

Lifelong Canadians face discrimination by their own government...still