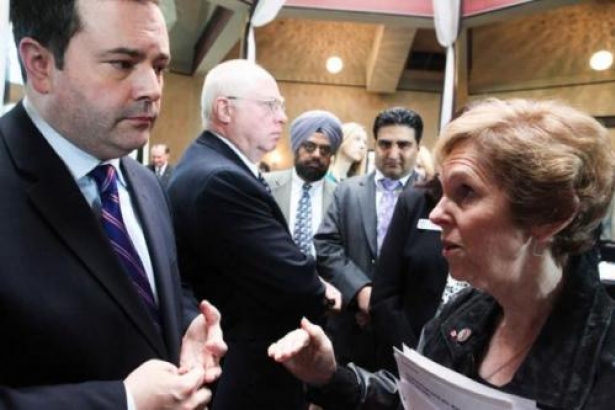 Former Citizenship Minister Jason Kenney and war veteran daughter Jackie Scott at a Burnaby Board of Trade event in 2012, moments before he told her her father was not a citizen in 1945. Photo by David P. Ball.

Jackie Scott, 68,  feels the sting of being a non-citizen each time she crosses the border from the U.S. into Canada, where she spends as much time as she can every year. As the daughter of a Canadian war veteran, and the mother of a Canadian daughter and grandchildren, Scott feels Canadian through and through.

Yet each time she crosses the border, Scott is pulled aside for questioning and detained, sometimes for hours.

"It's degrading," she said.

Scott is one of thousands of Canadians closely following the federal government's promise to do an 'overhaul' of citizenship law in 2014. As a Lost Canadian, she and others have suffered poor treatment by officials due to outdated laws that still deny Canadians citizenship based on arbitrary factors including age, gender, race and marital status.

Scott is being denied citizenship because she was born abroad to a Canadian soldier and British war bride before 1947, which is a problematic cutoff date in Bill C-37, An Act to Amend the Citizenship Act. If Scott had been born after 1947, she would be considered a citizen. Others like her, including war veterans, are also left out in the cold while people from other countries arrive in Canada and go on to acquire citizenship every year.

"That soldiers who fought and died for Canada during WWI and WWII are not recognized as Canadian citizens is wrong," Scott told The Vancouver Observer. "Is government waiting for attrition to take care of the issue? We’ve lost individuals who worked in and fought for  Canada, yet died being told by the government that they were not Canadians citizens."

Citizenship and Immigration spokesperson Amanda Lannan would not say whether the updated bill would address the Lost Canadian issue when reached for comment.

"New legislation is anticipated at some point in the near future. The details of the legislation will be made known at that time," she told a reporter a few days ago.

Scott is now taking legal action against the federal government to win her rights as a citizen. Her case, according to citizenship advocate Don Chapman, could be a "game-changer" for Canadian history, an equivalent of Roe vs. Wade for citizenship laws.

In Kenney's view, "clearly not" a citizen

Canadians who already have citizenship often don't understand what it's like to be rejected by one's own country, Scott says.

After years of relentless reporting by the Vancouver Observer on injustices suffered by Lost Canadians, it looks like feds are poised to right the wrongs.
Jenny UechiDec 30th, 2013

The Green Party of Canada is calling on the Citizenship and Immigration department to exercise restraint and to ensure that due process is followed in the case Richard Germaine, an elderly First...
Vancouver ObserverDec 13th, 2013
Speak up about this article on Facebook or Twitter. Do this by liking Vancouver Observer on Facebook or following us @Vanobserver on Twitter. We'd love to hear from you.

30th anniversary of the Charter, but Lost Canadians can't celebrate