It has been a week since the federal election and the pundits have been working overtime discussing the result. We have a new Conservative majority government and a new Official Opposition. Canada’s “Natural Ruling Party” lies critically wounded. The Bloc Quebecois is on life-support and the prognosis is not good. The NDP has new blood that will present both challenge and opportunity.

The dominos have not all fallen. Much remains to be decided in the next years. How will the NDP be affected by their new “Quebec-wing”? Are they Canada’s new centre left party and does this lead us to a two-party system as Conrad Black suggests (and appears to approve)? Or, can the Liberal Party find a path out of the wilderness to reclaim the Canadian centre?

The media postmortem on the Liberals has been extensive. Much of it has focused on how the party will respond to this crisis. Merger? Policy renewal? A charismatic new leader? It does matter what the remaining Liberals chose to do. They can offer the people choices. But, it would be foolish to think it is all in the hands of the party elites.

Political upheaval in Canada has two traditional centres. The winds of change have often blown west to east. From Social Credit to the CCF, the Reform Party and the Canadian Alliance, the West has been a nursery for new political movements. The other incubator has been Quebec. The Party Quebecois, the Bloc, the ADQ and most recently the elevation of the NDP all erupted from La Belle Province. This time around, Quebec has started the conversation. The West is yet to be heard.

The Federal Conservatives' “centre” is arguably western in their Reform and Alliance roots. The Liberals (leadership split between Toronto and Montreal) are decimated anyway and the NDP may now have a new political centre in Quebec. The time is ripe for further change. Ontario may decide the next election since it has so many seats that can be considered “in play”. However, unless there is a change in the West, the next election results will likely be much like this one.

It could be that the NDP is the new centre left alternative. Canada may be headed for two-party statehood. But this will not happen soon and it will not come from here in Ontario. Neither the NDP nor the Liberal elites in Ontario (Bob Rae aside) will go willingly in this direction. If at all, merger can come only after multiple electoral defeats much as it did for Reform/Alliance/Conservatives.

The other intriguing possibility is a merger that does not come from the power base in Ontario, but from the grassroots in places like British Columbia and the Prairies. The electoral map already shows a lot of orange out there. Could a grassroots driven merger of NDP and Liberals emerge from the West? It remains to be seen.

Or, perhaps something more dramatic could happen. For years, I have mused about the idea of a détente between Albertans and the Liberal Party. For those about to stop reading, I’ve lived there. I get it. The National Energy Programme was a disaster. There can be no forgiveness. But, Alberta and Albertans are not well served by a one party state.

As my colleague Evan Hu pointed out in his “Calgary Speaking” blog, changes are afoot. Interprovincial and international immigration are changing Alberta’s demographics. At the very least, immigrants from Bangalore or Moncton will have less prejudice about Liberal sins of the seventies. Add to this increasing urbanization which almost always has a small “l” liberalizing effect and one can imagine a day when the Alberta electoral map becomes a mosaic rather than the current sea of blue with an orange freckle. It was Calgary that elected Naheed Nenshi. He may not be a traditional Liberal or New Democrat, but he sure isn’t your same old Alberta Conservative.

Change will come but the form is yet to be determined. It may be that the NDP can profit and expand from their Edmonton base to be a true second choice. However, it seems that for Albertans, a more centrist, business-friendly, individualist alternative to the dominant conservatives might be a better or more palatable option. If the Liberals chose that policy path there may be an opening.

The parties will choose their paths and the people will decide. In the near term, it will be up to the NDP to integrate their new Quebec caucus. And, the Liberals will need to decide for what they stand. Later though, as the 2015 election platforms are being decided, and when new leaders are being chosen, it might serve the Liberal and NDP strategists very well to look west for both ideas, and leadership. 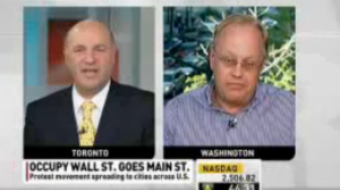