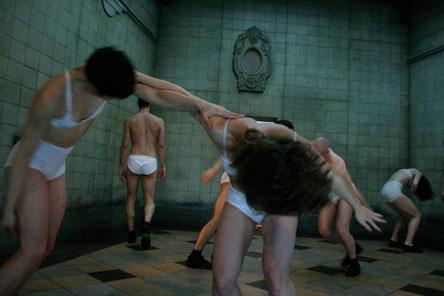 I first saw O Vertigo’s La Chambre Blanche in 1992, the year it premiered. I was a young dancer then, amazed and inspired by this cutting edge, unique dance work set in a white room filled with compelling characters, explosively physical and acrobatic dancing, and beautiful set, lighting and costume design.

My experience of seeing the piece again in 2011 is wildly different. I’m 19 years older and the contemporary dance world has advanced 19 years as well. I have great appreciation and respect for choreographer Ginette Laurin; La Chambre Blanche is most certainly an important dance work for its daring, its drama and its spectacle. In the year 2011, however, I question some aspects of the piece, although much of the work holds up quite well.

Upon entering the theatre, the set design wows. Suggestive of an asylum or a Turkish bath, there are three tall walls, a curved ceiling which encloses the space, and a thin ledge around the periphery about two feet off the floor. Four high windows, a stylized tile floor, and a faucet with running water at the back complete the environment. It’s incredibly filmic and as beautiful as any piece of visual art.

The dancers enter in the shadows, the women wearing nothing more than high-waisted panties, bras and black heels, the men in white briefs and black shoes. What follows is a 70-minute study of nine people in captivity, and the chaos and vulnerability that ensue.

Martin Labrecque offers a lighting design that knits choreography, interpretation and set environment into a seamless fabric. Fluorescent lights blast from above and from the floor level, illuminating a harsh, unattractive world. The dancers can’t hide their madness under the glare. Bodies are projected in larger than life shadows against the scuffed, worn walls. Glowing amber lights stream in from the windows and grates suggesting the warmth and freedom of the outside world. The piece is often chaotic; everyone is dancing, talking, running, falling or flailing at once. The lighting design effectively works to focus the choreographic action as it travels around the room. Through his design, Labrecque creates cohesion in this intimate, compelling world.

The dancers are hurled from wall to wall; they throw themselves on the floor, balance and fall from the thin ledges; they get launched to the high windows so they can pull themselves up and peer out beyond the room that confines them.

Classic O Vertigo sensibilities are ever present: the athletic partnering, the acrobatic physicality, the risky, off-balance manoeuvres. Dancers fall into each other’s arms blindly and are sometimes manipulated only by the fabric of their black costumes, which hang off them half fastened, making them appear half-dressed, half-sane.

Like so much of the choreography of the ‘80s and ‘90s from Montréal companies like O Vertigo and La La La Human Steps, the movement is often fast and gestural. At one point, the men prop a female dancer against the wall horizontally and bench press her at least eight or nine feet off the floor. And later, the same dancer is set spinning by two men as she lies taut on the floor. She spins so fast it doesn’t seem humanly possible. Although at times, the partnering seems simplistic compared to some of the duet work seen on the contemporary dance stage today, as far as I’m concerned, La Chambre Blanche’s remarkable athleticism will never be out of style.

My first question is one of interpretation. The dancers seem to play “crazy” for most of the piece. With its over-the-top theatricality, it feels like a docu-soap about nine people going mental in captivity. Dancers run around frantically, they talk to themselves, they make strange animal noises, they tremble, they’re constantly at their wit’s end. I’d rather see the dancers stripped of the theatricality and dramatics in order to experience their confinement and alienation from the inside out, from the physicality of the choreography itself. Their caricature of madness becomes two-dimensional, and never goes deeper than the surface.

My second question concerns the climax. As I experience the piece, I struggle to find one, or if not a climax, a turning point, a resolution, a resignation, or anything like that. The piece ends abruptly with a woman in a stylized straitjacket with the sleeves stretching beyond the walls of the white room. I wonder, is she forever stuck within the confines of her own mind? Maybe. Do I need to see her in a straitjacket to understand confinement? Probably not. In any case, the final moments leave me wanting. The characters need to change or be changed by their experience and the vulnerability it inspires.

La Chambre Blanche does not feel as contemporary or as current as it did in 1992. Nor should it. This piece is a fascinating window into Montréal dance of the early ‘90s. At the time the incredible set, the lighting, the depiction of madness, the costumes; this work was spectacular, especially for a young, impressionable dance student like me.

These days, when it comes to contemporary dance performances, I now expect to see people dancing in their panties, I expect to hear dancers speaking or muttering to themselves on stage, I expect to see extreme physical risk and I expect to see incredibly sophisticated set and lighting design that are integral to the overall vision of a choreography. But Ginette Laurin did it twenty years ago, and paved the way for others to take risks in their dance making. She was a visionary then, and a visionary she will remain.

La Chambre Blanche
May 6-7, 2011
The Vancouver Playhouse
A DanceHouse presentation