Is Spain's loss to the Swiss the biggest upset in World Cup history? 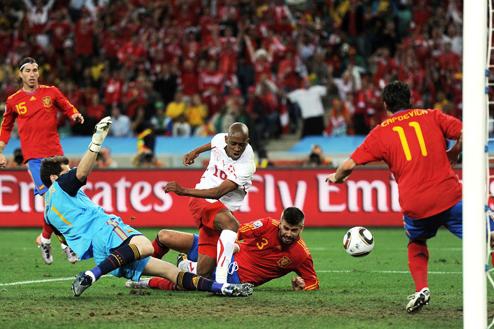 The world is shocked as Gelson Fernandes scores the eventual winner for Switzerland.

Before the Spain-Switzerland game, it seemed there was no chance of Switzerland tying Spain, much less beating the Euro Cup Champions. The Swiss put out an impressive defensive performance without their defensive leader Phillipe Senderos. Spanish Coach Vincente Del Bosque decided that Fernando Torres would not be needed for the full 90 especially since Torres was battling fitness issues. During the first 10 to 20 minutes Spain had possesion right around Switzerland's 18, but never looked dangerous. The first half ended with the whole football world surprised by Switzerland's amazing defensive display. The second half started off similar to the first half, but in the 52nd minute Gelson Fernades' goal shocked the world, and Spain really never threatened again in the game.

This result got people thinking, "Was the Swiss' win the biggest upset in World Cup history?" You can make an arguement for the Swiss, but 8 years ago France entered the World Cup expected to win also. France started its World Cup against a small African country called Senegal which I had never heard of before. The Senegalese pulled off a huge shocker beating the French 1-0 with a goal that was considered just as scrappy as Switzerland's goal. There is also the 1950 upset when the USA beat England 1-0 with a goal from Joe Gaetjans and shocked the world. There is one more upset that can be put in this category and that is North Korea's win over Italy in 1966 who was considered to challenge the Jules Rimet trophy.

In my opinion the greatest upset was Senegal's win over France, considering the huge expectations considering that they were ranked very low in Fifa's rankings and that France was number 1. But don't get me wrong the Switzerland upset over Spain is right up there with Senegal's.

What do you think? Do you agree, or disagree? Please give us your opinion on what is the greatest ever upset in the World Cup.