Once upon a night in Fort Langley...

The Centennial Museum is chock full of art and jewelry created by local artisans, in addition to artifacts that are specific to Langley and tell a story of the township's history. We learned that in 1928-29 the artifact collection was pieced together by the "Native Sons", a voluntary organization who purchased the last remaining building at the Hudson's Bay Company Fort Langley. After checking out the First Nations Gallery and the History Gallery we browsed the museum's current art exhibit that was showcasing many artists from the Fort Langley Art Group (FLAG), which was celebrating its 20th anniversary.

In addition to their static pieces, the museum also plays host to a few seasonal events, such as the Cranberry Festival which happened in October, and the upcoming Pioneer Christmas on December 7th. Pioneer Christmas is a family-friendly event that involves crafts, old-fashioned toys and a visit from Saint Nicholas. 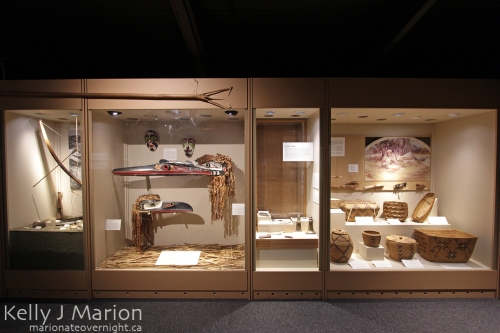 After a brief stint of soaking in culture through creative expression, it was time to jump into the agricultural side of things at the BC Farm Museum. The informal set-up of this nearly 50-year-old museum allowed us to wander around freely and check out machinery and tools as we pleased. This is a place where you could spend hours in if you wanted a thorough visit, or a short amount of time if you were more interested in painting an overall picture of how things have progressed. I was particularly fond of the "dated" tractors and chainsaws, and the impressive collection of guns.

The museum has been run by a team of volunteers since 1990 when they had to cut wages due to a shortage of funding; it's incredible to see what passion alone can create and maintain. [The BC Farm Museum is currently closed until April 1st, 2014.] 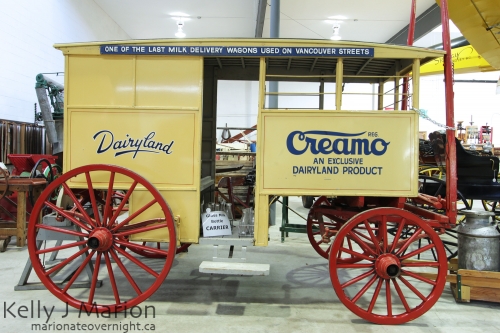 The afternoon's activities grew our appetites, so, fitting to the day's historical theme, we wandered over to a restaurant called Eighteen 27. Based on the name, I was expecting to be taken back 186 years upon entering the venue, but instead was surprised to see that the decor was modern with an edgy appeal. We sat at a long table in the centre of the restaurant with the piano, textural art from a local artist and the bar all in clear sight. Unfortunately, there was no live music when we were visiting, but I've heard they have some talented local pianists that put on a good show.

The first step of the evening was to take a look at the libations. Eighteen 27 has an inventive martini list and a decent selection of wine, but it's lacking in craft beer. I opted for an 1827-Pear Martini (something new), followed by a glass of  J Lohr Cabernet Sauvignon (something old), both of which were very satisfying and hit the spot.

I enjoyed most of the food, but my "tapa" recommendations are: Candied Pecan Brie: puff pastry shell, cranberry relish and artisan bread; Mascarpone Risotto Balls: mixed with fresh herbs and served with tomato sauce; and the amazing Steak Wellington. 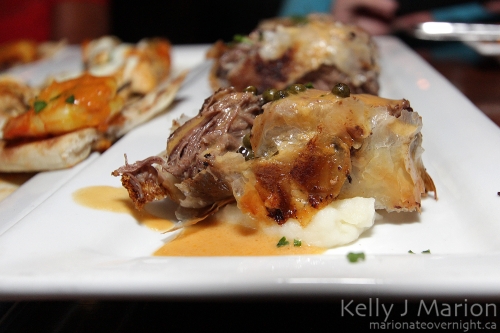 The chicken skewers were moist and juicy, but you can get skewers anywhere, which is why it didn't make my recommended list. The vindaloo prawns had a nice taste, but were better off on their own as the naan contributed nothing outside of the visual aspect, which emphasized the ethnicity of the dish.The croquettes were bland and tasted like breaded, potato balls as the name implies; flavourful sauce, spices or herbs are definitely needed for this dish to improve. 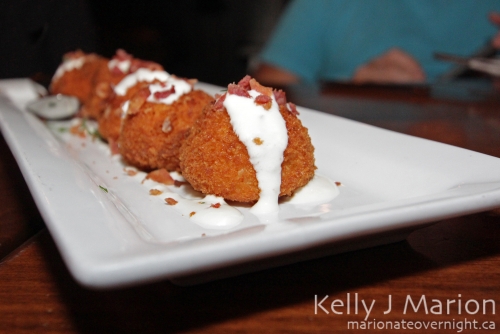 Stuffed from dinner we congregated in the graveyard to commence the Grave Tales tour. The two hour tour taught us more about the prominent historic figures of the time, but this time in a eerie manner.  We wandered around town from graveyard to graveyard hearing stories of those lost many years ago. The lingering spirits included those of a young boy's ghost who still wants to play, a separated couple desperately seeking each other, and a wandering fisherman with an apparent drinking problem (when you hear the story you'll understand).  Our tour guide Aman put on a wonderful performance and was right in character as he led us through the town and back to the Fort. He allowed questions to be asked along the way, of which he was stumped by none; clearly the man knows Fort Langley's history inside and out. And now, I'm that much closer to knowing it myself. 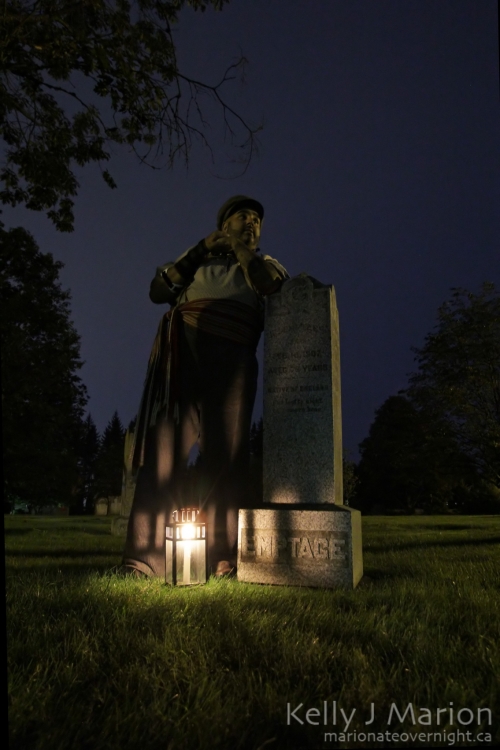